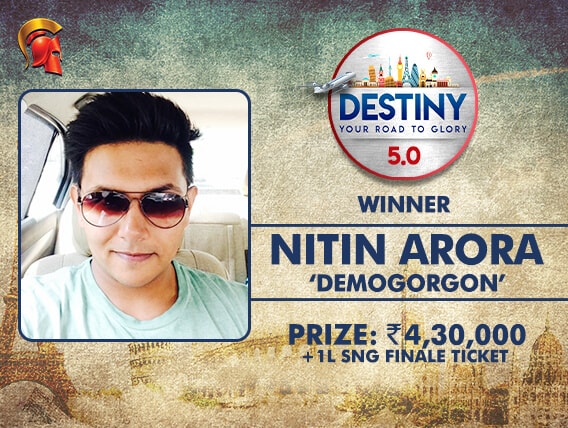 
Every Wednesday, The Spartan Poker holds the Destiny poker tournament, which has a massive guaranteed prize pool of INR 20 lakh. Every week, one winner walks away with not just his tournament winnings, but an INR 1 lakh buy-in to the Destiny SnG Finale, where the winner will be awarded a package trip to play poker in Europe.

10 winners will take part in the Destiny SnG Finale and Phanindra Akkina was the third winner last week, while last night’s Destiny tournament was shipped by none other than Nitin Arora aka ‘Demogorgon’, who took away the top prize of INR 5,30,000, of which INR 1 lakh will be deducted towards his seat into the Destiny Finale.

Remember, it was just last week that Arora got his last big win on The Spartan Poker, when he shipped the Mega Freeze Event last Monday. Now, he beat 386 entries in Destiny for another big score that has added to his bankroll and has given him a chance to compete in Europe as well.

The tournament began yesterday evening and was on till after 4 am IST this morning. The final hand was played between Arora and ‘Arjun1’, in Level #53 where blinds were running at 17,500/35,000 – 3,500. Arora was slightly ahead on chips and both players went all-in, as both hit straights on the turn. However, Arora had a higher straight, which gave him the title while Arjun1 had to settle for the second-place prize of INR 3,30,000.

Gutshot caught up with Arora after his second big win in the last ten days. The 24-year old gave us a bit of a background to his life and his introduction to poker when he shipped the Mega Freeze last week, beginning his online poker career by depositing INR 200 on PokerBaazi and playing cash games there. “Live tournaments was where I started from. Always feel more comfortable while playing live,” he said.

About yesterday’s tournament win, he said, “The tournament was going smooth. It is always a motivation to ship Destiny because we get a chance to play a Sit n Go for EPT. The hand against ‘donkaking’ (AA>AQ) gave me a good chip lead and that was a key hand. It’s always fun playing on The Spartan Poker, as they have high-value tournaments, good promotions and smooth cash outs.”

Talking about his future in poker and his plans with this prize money, he said, “Looking forward to play the upcoming DPT and most probably Manila Super Series in August. Haven’t planned what to do with the money. I will save a chunk of it and rest of it goes in the poker bankroll!”

Keep reading GutshotMagazine.com for daily updates on online poker tournaments in India and around the world.