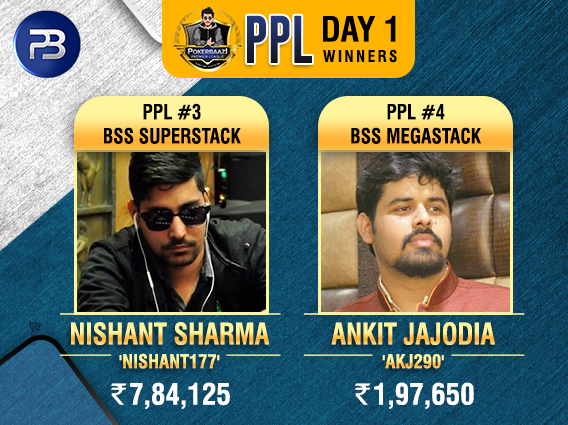 
Everyone was eagerly waiting for the latest edition of PokerBaazi Premier League (PPL) on PokerBaazi, as the series guarantees INR 5+ Crore in prizes between 21-28 April 2019. Moreover, there’s a lot of sentiment involved in this special edition PPL series, as a portion of the rake generated will go towards a special cause – the education and development of underprivileged girls in India.

Yesterday was Day 1 of this series and three tournaments declared winners yesterday which included Nishant Sharma, Ankit Jajodia and Vaibhav Temani. The PPL Endeavour also kicked off yesterday, with two starting flights being played out. These flights were topped by Dhiren Rupani and Dhruvin Kothari respectively. Keep reading for a complete summary of Day 1 of the PPL Special Edition…

The series began with the first starting flight of The Endeavour at 5pm last evening. The success of the recent Game Changer on PokerBaazi and their consistent smashing of tournament guarantees in recent times meant that they gave this tournament multiple flights as well. It had a buy-in of INR 5,500 and a total of 633 entries (245 re-entries) registered, with the prize pool going well past INR 31 Lakh.

By the end of the specified levels of play, it was Dhiren Rupani aka ‘Sharpshooter’ who topped the field and he will go into Day 2 with a decent advantage over the rest of the players in the field. Those who ended within the top ten chip counts included Akash Gupta aka ‘durrrr1310’ and Sandeep Varma aka ‘effuno’. Day 2 will be played on 23rd April at 8pm.

The weekly BSS PLO tournament was the next one lined up for the day, beginning at 6:30pm. The participation in the tournament was 293 entries, which included 149 re-entries. Each of them paid the buy-in of INR 2,750 and the resulting prize pool was increased to INR 7.32 Lakh, which was eventually shared among the top 30 players. Eventually, it was Vaibhav Temani aka ‘vane_shado’ who emerged victorious, adding INR 1,96,310 to his poker bankroll.

Next to kick off on PokerBaazi yesterday was the very popular BSS SuperStack, which happens to be their biggest weekly featured tournament. Again, the buy-in was set at INR 5,500 and the field saw a number of top Indian pros in contention, like it is each Sunday. 615 total entries (including 296 re-entries) made this field and from them, the top 63 places were paid.

It came as no surprise that the guarantee was passed and the player who took biggest advantage of the INR 30.75 Lakh prize pool was none other than Nishant Sharma aka ‘Nishant177’. There would’ve been some killer poker action as the Final Table included the likes of Goonjan Mall, Kartik Ved and others. Eventually however, Sharma faced Rajesh Shukla aka ‘intervntion’ in heads-up, with the former coming out on top and taking away a massive prize of INR 7,84,125!

Ankit Jajodia really brings out his A-game each time the PPL returns. In the October 2018 edition of the series, Jajodia ended up shipping the BSS SuperStack as well as the BSS MegaStack, which also resulted in him topping the Monthly Major Leaderboard. Yesterday too, he was on top of his game as he emerged victorious in the MegaStack, adding INR 1,97,650 to his poker bankroll. Jajodia has been playing some good poker in recent weeks, having also won the DPT Xpress Main Event in Sikkim.

Playing under ‘akj290’ on PokerBaazi, Jajodia paid the INR 2,750 entry fee as did everyone else in the field of 295 entries, which saw the prize pool swell up to INR 7.37 Lakh. 30 players were paid out but Jajodia wanted the biggest prize of all, which he received after knocking out ‘Praveenmac’ in heads-up. Jajodia will surely be in contention for other tournaments throughout the series and will be looking to top the leaderboard as well.

The second flight of this tournament took off at 9pm and the field was 666 entries, which was even better than the first flight. The overall field is now at 1,299 entries which smashed the advertised guarantee, inflating the prize pool to nearly INR 65 Lakh. Among those who survived the day, Dhruvin Kothari aka ‘thepokerplayer’ ended with the biggest stack, and that will give him a big boost when he resumes on Day 2 tomorrow.

62 of these players will finish in the money in The Endeavour and you can keep reading GutshotMagazine.com for all updates on the tournament, as well as every other tournament in the ongoing PokerBaazi Premier League (PPL), so stay tuned.