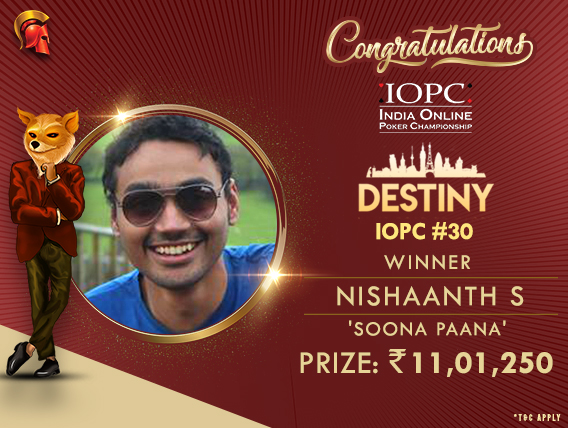 
The overly popular India Online Poker Championship (IOPC) is underway on The Spartan Poker platform since 11th January 2019. The series has a total guarantee of over INR 8.5 Crores and will run till 20th January.

Yesterday, Day 6 of IOPC was in the books and among them the biggest tournament was the feature tournament of Wednesday, the Destiny INR 30 Lakhs GTD, but under the IOPC umbrella it had an increase in its usual guaranteed amount of INR 20 Lakhs.

The tournament drew a total of 881 entries (169 re-entries and 356 re-buys) for a decent buy-in of INR 5,500. The field was packed with many regulars and pros in the mix who made it in the money. Out of the 70 places paid, the winner to bag the title and the huge 1st place cash prize of INR 11,01,250 was online grinder Nishaaanth Shanmughasundaram aka ‘Soona Paana’. He beat ‘loveyouball’ in heads-up to secure his victory. The runner-up also won a huge pay-check for INR 6,60,750.

Shanmughasundaram has accumulated a fair amount of cashes previously playing online. He recently won two significant titles on two different platforms, one in Spartan Super Series for almost INR 4 Lakhs and the other was in PokerBaazi Premier League Winter where he made almost INR 1.3 Lakhs, both in the span of 2 days last month. This also makes his biggest online score till date, so it will prove to be a huge boost to his career and bankroll, and we’ll see more of him in upcoming IOPC tournaments, the right way to spend your winnings.

We got in touch with Shanmughasundaram, who hails from Bengaluru, and he had this to say about his victory, “This is my biggest live score so far. IOPC is one of my favourite tournament series as it provides huge value. I’m looking forward to the remaining events in the IOPC and also the Destiny Finale SNG.”

The field would’ve been quite a competition for Shanmughasundaram as it had few good players in the mix. Pranav Bang aka ‘CalvinKlein’ finished 8th for INR 66,075. Arjanveer Chadha aka ‘instrumental’ also finished in the money at 10th for INR 48,445.

The other four tournaments on Day 6 yesterday all broke the guarantees and turned out be hugely successful. Keep reading GutshotMagazine.com for timely IOPC updates and results as well as for other poker news from around the world.