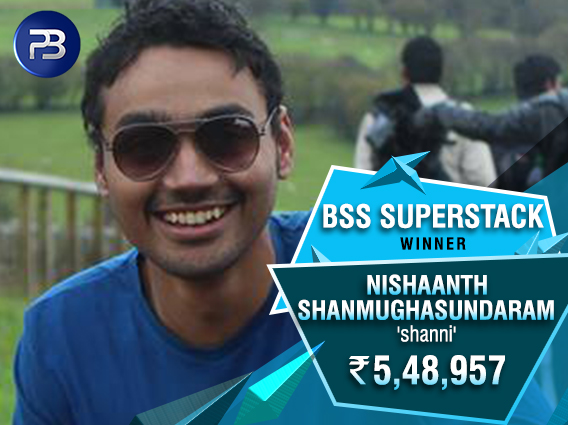 
PokerBaazi, one of the leading poker companies of India, recently announced and successfully conducted the biggest online poker tournament in Indian online poker history, the Game Changer INR 2 Crores GTD. The impressive part was where this guaranteed prize pool was crushed by a huge margin of INR 1.77 Crores.

Yesterday was a Sunday and so the BSS SuperStack INR 25 Lakhs GTD feature tournament was hosted on PokerBaazi, buoyed by the success of such major recent events. The tournament began at 7 pm on the platform and was over by 3.53 am today morning. It attracted a total of 635 entries (including 275 re-entries) for a buy-in of INR 5,500. The top 107 places were paid for a min-cash of INR 8,890.

Overcoming the field and bagging the title was known regular Nishaanth Shanmughasundaram aka ‘shanni’ on PokerBaazi for INR 5,48,957. He beat another regular who must’ve proven to be a tough opponent, Neel Joshi aka ‘Worm33’. Joshi earned INR 3,82,587 as runner-up cash prize in the tournament. The FT would’ve been tough as it included Sumit Sapra aka ‘boronyx’, well-known grinder, who rounded up the top 3 for INR 2,66,700.

Shanmughasundaram is a frequent player on virtual felts in India. He has numerous significant titles to his name like the Spartan Destiny which he won in the January 2019 IOPC. He even won Godfather in the same month on Adda52 and bagged two chances to fly abroad. With this win last night, he has earned another top cash prize and will be looking forward to shipping the horde of events lined up for the year.

We contacted Nishaanth after the win and he said, “It’s always special to ship a tournament, more so if it’s on PokerBaazi as it’s my favorite platform. I have reduced the MTT volume considerably of late, mostly playing tournaments on Sunday, cash games on weekdays. So this win is definitely a good boost to my cash game bankroll. Regards to tournament, I ran horribly at the beginning with my Aces and Kings getting cracked quite early, had to take multiple bullets. I ran much better once the late reg was over, final 3 in the FT was quite swingy as there were 2 very good regs along. Luckily I was on the right side of the flips at the end.”