A new chapter awaits the SRO Motorsports Group for competitive sim racing this weekend at Monza. 24 AWS drivers and teams powered by Fanatec GT World Challenge Europe will battle for points in the first event of the Fanatec Esports Gt Pro Series.

The one-hour race that took place on Saturday was staged on Assetto Corsa Competizione at Monza’s paddock. The paddock represents motorsports’ fully integrated crossover between the virtual and real competition.

Though all of these stars will be participants, Ricardo Sanhez is considered to be the Round 1 favourite. This Mexican racer has been considered to be one of the best and this stands true as he most notably won the virtual GT Academy title in 2014 which resulted in a NISMO GT3 prize drive. According to the 2020’s SRO Esports GT Series, Barnicoat, Ezequiel Companc (Madpanda Motorsport, Mercedes-AMG) and Arthur Rougier (Emil Frey Racing, Lamborghini) will be the ones watching the race.

Take a look at the Fanatic Esports GT Pro Series: 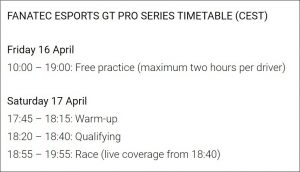 One driver per Pro and Silver Cup will be contesting in Sunday’s three hour race and they will also enter Saturday’s qualifying session and the 60-minute Fanatec Esports GT Pro Series race. Each driver is expected to make sure that there is a mandatory pitstop between 25 and 35 stops. Racers are allowed to change tyres and they are expected to add at least one litre of fuel. The Success Ballast will be added in the order of 30 kg, 15 kg and 10 kg for both the class top three finishers for round 2.

Success Ballast: In general, ballast is a device that is added to a race car to alter its performance.