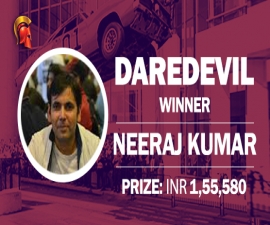 
Saturday action at The Spartan Poker has the DareDevil as one of the daily featured tournaments of the evening. Last night’s DareDevil was claimed by Neeraj Kumar a.k.a ‘slowplayaces’ outlasting a field of 82 entries.

This tournament allows busted players to re-enter for a discounted price of INR 2,000 (initial buy-in is INR 4,400) so the eventual prizepool ended up being INR 6,56,000 well past the guarantee on INR 6 Lakhs. 11 players were paid out with INR 16,480 being the minimum sum assured for the money finishers.

From 82, it came down to three-handed action in just over 5 hours and along with slowplayaces (1.1 million in chips) who was the dominant stack, there was another reg in Pulkit ‘Championplayer’ Goyal (356k) as well as ‘Wraithlord’ (348k). Holding Jc Ks, Wraithlord moved all in to see slowplayaces get out of the way. Unfortunately for him, Championplayer woke up with Kings and made the call. Wraithlord would have to get incredibly lucky to survive this hand but it was not to be. A board of 4d 9s 5d 5s 9d kept Championplayer’s Kings well ahead and that was the end of the road for Wraithlord.

Both headsup players played exactly two more hand, the last of which gave a 250k pot to Championplayer. That brought both players to almost even stacks and with that they decided to sette on an ICM deal which gave Neeraj Kumar the title and INR 1.55 Lakhs and for his runner-up finish, Pulkit Goyal got INR 1.53 Lakhs.

These top finishes should give both players a good number of Hot Tournament Leaderboard points and we will bring you that update tomorrow right here at GutshotMagazine.com!