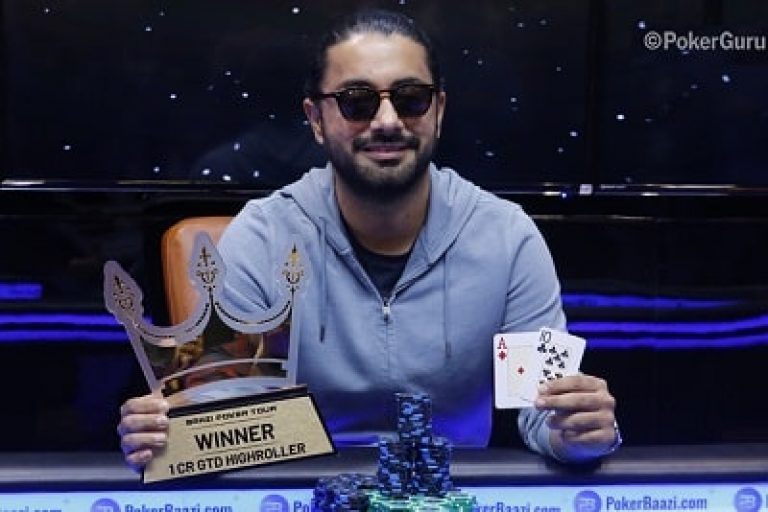 
The third tournament to kick off in the ongoing Baazi Poker Tour (BPT) was the 100k High Roller which attracted 118 entries a couple of nights back on Day 1, with Ashish Ahuja taking the overnight chip lead among 33 survivors who managed to grab a bag after a tiresome day of play.

Yesterday, registration shut with a total field of 125 entries, meaning only 7 entries registered on Day 2 of the tournament on board the Casino Pride 2 in Goa’s River Mandovi. It was not long into Day 2 that the prize pool and prizes were announced, with the top 15 places being paid a min-cash of INR 2,11,400, and a whopping INR 31,82,300 being reserved for the winner.

Through the day, it was Ashish Munot who was putting pressure on the smaller stacks and chipping up consistently, taking the chip lead by the first break of the day. However, it wasn’t Munot who was crowned the eventual champion of the 100k High Roller, but PokerBaazi CEO himself, Navkiran Singh.

Not much of a tournament player, Navkiran won a title in Vegas last year and decided to be a part of this High Roller as well, where he had to beat some of the better names in Indian poker to get his hands on the trophy. In heads-up, he beat Rohit Mishra and bagged a massive payday of INR 31,82,300.

When there were 16 players left, all decided to go for bubble insurance and pool in 5,000 each from their winnings, which meant that the bubble boy wouldn’t go home empty handed but with INR 75,000! Eventually, it turned out to be Krishna Kumar who busted in 16th place and luckily, he didn’t have to walk home empty handed.

Munot and Ahuja busted before the FT and when we were down to 8-handed, Rohit Mishra held the chip lead. Singh was second in chips and slowly started bridging the gap as known pros like Ankit Wadhawan (8th), Abhishek Goindi (7th), Romit Advani (5th), Raghav Bansal (4th) and Shashank Jain (3rd) all left the tournament floor.

The final hand saw Mishra limping in, Singh raising, Mishra moving all-in, and Singh calling. Mishra revealed pocket Sixes against Navkiran’s AT which completed a straight on the 4 K J Q 7 board. “It still feels very surreal…hadn’t planned for this. So I still don’t know how to feel about this because I’m not really a tournament player,” he said after the victory while Mishra settled for INR 22 Lakh as runner-up prize.

For more updates on the Baazi Poker Tour and other tournaments from around the world, stay tuned to GutshotMagazine.com.