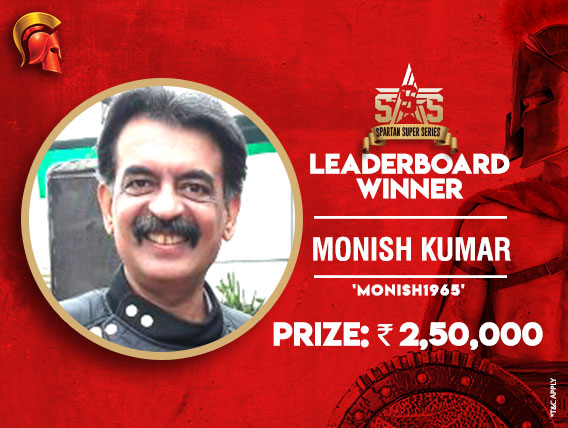 
5 days, 26 tournaments, loads of excitement and plenty of prizes won. Just like that, we’ve come to the end of yet another edition of the cash-rich Spartan Super Series (SSS), which is one of India’s most popular online poker tournament series hosted every so often on The Spartan Poker.

Now apart from just tournament winnings, Spartan encourages players who perform consistently through the series, with rewards in the form of SSS Leaderboard prizes. For this series too, Spartan had an addition INR 5 lakh up for grabs in cash prizes on the SSS Leaderboard, including INR 2.5 lakh reserved for the eventual winner.

There are always going to be top players gunning for that spot at all times, but Kumar stuck to it and was deservingly awarded INR 2,50,000 for winning the SSS Leaderboard. Right behind him on the standings was a Spartan regular ‘Crime_Master_Gogo’ who has won many big titles on their platform in the past. He won INR 1,00,000 for finishing second.

Gutshot caught up with Monish Kumar to congratulate him on this tremendous achievement. Talking about the leaderboard experience, he said, “I had a great time grinding with all the pros and champs in the SSS series on Spartan. I spent half the time keeping a tab on the SSS Leaderboard, watching and making sure no one overtakes me.”

Kumar has been playing poker for around 3 years now, and he seems to be at a good space at the moment. Maybe opponents will start watching out for him in bigger tournaments from now on. Talking about the competition, he said, “Many players kept me on my toes, including ‘7wik’, ‘Jannat52’, ‘Strangeplay’, ‘AlwaysSmile’, and ‘Gro$peLLier’.”

For more updates on online poker in our country, keep reading GutshotMagazine.com.