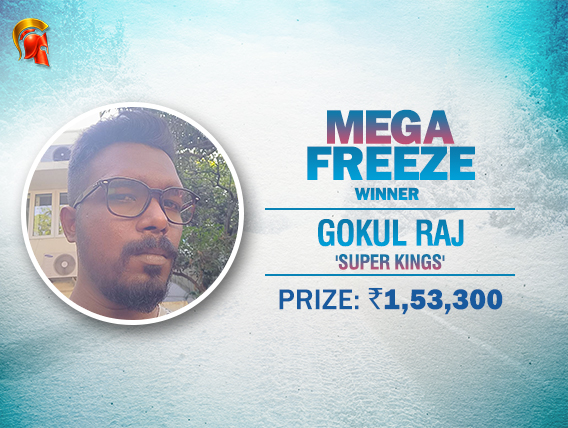 
Every Monday night, The Spartan Poker hosts a tournament called Mega Freeze and as the name suggests, it is a freezeout tournament. In this format of the game, once you bust your stack, there’s no coming back. No re-buys, no re-entries, no second bullets. Just one chance!

Yesterday, Mega Freeze INR 6 Lakh GTD kicked off at its usual time of 7:30pm on Spartan, and 103 unique players registered to this INR 5,500 buy-in event. As the night progressed and the field narrowed down, the top 15 players walked away with a profit, finishing in the money with a minimum cash prize of INR 10,800, which is nearly double the original investment.

At the end of the night, it was Gokul Raj Dharmarajan who ended victorious, outlasting a tough field to take down the tournament and the top prize of INR 1,53,300. Playing under the username ‘Super Kings’ on Spartan, there are no prizes for guessing which team Gokul Raj supports in the Indian Premier League.

Raj had more than a 2:1 chip lead before the final hand could take place last night. He held Jd 9c and Kapur held 7s Js as both players hit top pair on the 8h Jc 5c flop. However, Raj bettered to two pairs on the 9s turn. Here, Kapur went all-in and Raj happily made the call. The river card opened 3c and Raj won with Jacks and Nines.

In the latest IOPC series in July this year, Raj also won Event #55, so this isn’t the first time he’s claimed a major title on Spartan. For all updates on future Spartan featured tournaments, keep reading GutshotMagazine.com.