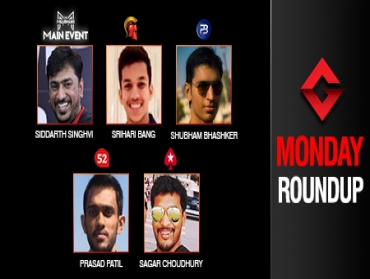 
It was a big weekend online across Indian poker platforms but even past the weekend, the thrill continues! The action slowed down last night with the commencement of working week, yet this did not stop the players from taking their seats and grabbing titles and big prizes! Spartan Poker kicked off its biggest ever online poker tournament in India till date, the IOPC Millionaire Main Event INR 3 Crore GTD! On the other hand, Spartan’s ReCharge, The Bout on PokerBaazi and Adda52’s Inception were other major attractions. And here is a complete summary of Monday majors…

The Millionaire Main Event (Day 1A)

With poker fanatics looking forward to Millionaire multi-flight tournaments, Spartan Poker ran the first flight of its IOPC Millionaire Main Event. Apart from the rest of the high-value tournaments in the series, the IOPC Millionaire is the biggest attraction in the schedule with a massive INR 3 Crore GTD prize pool.

Day 1A registered a total of 606 runners entering the tournament, with each one chipping in the INR 11,000 buy-in to create the day’s prize pool of INR 60.60 Lakhs. After hours of grinding and eliminating players, we had the chip leader emerging in the form of well-known reg Siddarth Singhvi aka ‘PeterPunter’ who finished the first flight with a massive stack of 2.96 million but not far behind was his close competitor ‘monuguru’ who bagged 2.91 million chips at the end of the night.

And while the first flight got into its mid-stages, another featured tournaments in ReCharge INR 14 Lakhs GTD, headlined the Monday features on Spartan Poker. After paying INR 2,200 as their buy-in, a total of 978 runners made up the field. This massive number of entries saw the advertised GTD amount crushed with the final prizepool of INR 19.56 Lakhs to be shared among the top 87 finishers. Capturing the title and the largest portion of the prize pool was a prominent name on the circuit, Srihari Bang aka ‘bangbang99’ who outlasted ‘TheWitcher’ in heads-up.

Shubham Bhashker dominated a field of 570 entrants on PokerBaazi’s The Bout INR 10 Lakhs GTD to seize the winner’s prize money of INR 2.69 Lakhs. The buy-in to the tournament was INR 2,750 which smashed the guarantee to create INR 14.25 Lakhs in the prize pool out of which the top 72 places earned a min-cash. Bhashker aka ‘Kal***nd’ conquered the field and defeated Ashit Sharma aka ‘nexus010’ in heads-up. Sharma managed to add INR 1.88 Lakh to his poker bankroll for finishing up in the runner-up position.

Adda52’s Monday headliner Inception INR 10 Lakhs GTD has a buy-in of INR 3,500 and saw a total of 357 competitors enrolling in. The assured amount was also surpassed creating a bigger prize pool of INR 11.42 Lakhs, to distributed among the top 38 finishers. It was Prasad Patil aka ‘Goodmanji’ who captured the first-place prize money of INR 2.85 Lakhs after railing out ‘wormhole’ in heads-up who eventually earned INR 1.73 Lakhs

Other notable players to cash include Naren Purohit aka ‘IMUNAGI’ (3rd), Sahil Mahboobani aka ‘ImHighIshove’ (24th), Anurag Srivastava aka ‘NormanBates’ (25th), Pranav Bang aka ‘pranavbang’ (28th) and others.

Online reg Sagar Choudhury also known as ‘sagarpupull’ took down the Monday Hustle INR 5 Lakhs GTD tournament on PokerStars last night. Choudhury outlasted a field of 169 entries, each one of whom entered for a buy-in of INR 3,300 which ultimately crossed the advertised guarantee to create a prize pool of INR 5.07 Lakhs. Choudhury would go on to defeat ‘bhasm@sur1’ in heads-up for the INR 1.02 Lakhs winner’s prize.

Other notable players to cash include Ram Kakkar aka ‘TheLagLawyer’ (11th), Neeraj Kumar aka ‘SelfClaimedPros’ (18th), Sandeep Varma aka ‘effuno007’ (20th) and so on. For the latest updates on live and online poker tournaments keep reading GutshotMagazine.com and stay tuned!