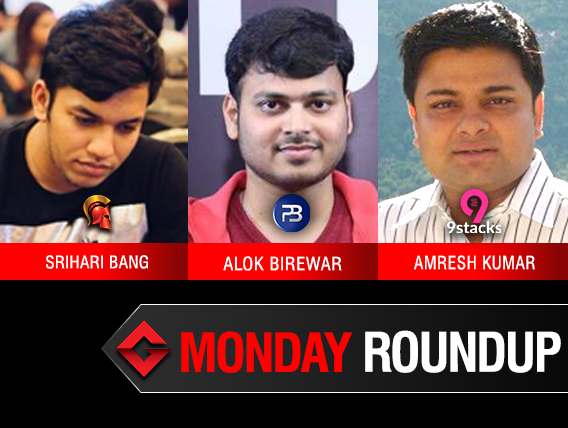 
A smashing Sunday gave way to a pale Monday night. With no dearth of events, the guarantees went down, yet the enthusiasm continued. Headlining the online tournaments were Spartan Poker’s ReCharge INR 12 Lakhs GTD, PokerBaazi’s The Bout which displayed INR 10 Lakhs GTD and the ongoing Adda52 Online Poker Series that hosted Inception INR 12 Lakhs GTD. And here is a complete summary of Monday majors…

A well-known circuit grinder playing under the username ‘bangbang99’ captured his second consecutive Monday title after taking down last night’s ReCharge INR 12 Lakhs GTD on Spartan Poker. Srihari Bang, who is making few deep runs for the past few weeks conquered a field of 623 runners. The tournament guarantee was eventually surpassed creating a slightly bigger prize pool out of which the top 55 players took home a min-cash. The event ended when Bang defeated ‘RULS’ in heads-up with his two pairs of Jacks and Eights over his opponent’s high card Ace and boosted his poker bankroll.

Other notable players receiving a paycheck include Anuj Yadav aka ‘moZart’ (4th), Ram Kakkar aka ‘TheLagLawyer’ (24th), Vivek Singh aka ‘KasolHieghts’ (39th), Naren Purohit aka ‘IMUNAGI’ (41st) and so on.

PokerBaazi’s flagship tournament The Bout INR 10 Lakhs GTD enrolled a total of 426 players with each one paying INR 2,750, driving past the guarantee to create a bigger prize pool, well-received by the top 54 finishers. Seizing the first-place prize money was Alok Birewar aka ‘TheProfessional’ who eliminated Ameya Gokhale aka ‘Encashed’ in heads-up for INR 2.14 Lakhs in prize money. Eventually, Gokhale settled in the runner-up position and bagged INR 1.5 Lakh.

Inception INR 12 Lakhs GTD was part of the ongoing AOPS on Adda52 last night. The Monday feature attracted 410 players for INR 3,500 buy-in. This number was enough to cross the assured amount a create a final prize pool of INR 13.12 Lakhs and the biggest portion of which was taken by ‘sharptooth’ who secured INR 3.25 Lakhs in prize money. The winner beat ‘emperor475’ in heads-up who gradually settled for INR 1.96 Lakh in the runner-up position.

PokerStars’ flagship tournament Monday Hustle INR 5 Lakhs GTD registered a total of 171 players after each one paid INR 3,300 buy-in. The final prize pool of INR 5.13 Lakhs was well-received by the top 27 places and the largest chunk of the same was seized by an anonymous player ‘$00th$ayer’ who took down the tournament and pocketed INR 1.03 Lakh in prize money after knocking out ‘ARYAN5**’ in heads-up.

INR 2,000 was the buy-in to enter Hercules INR 2 Lakhs GTD on 9stacks (Signup using code “GUTSHOT”) which garnered a total of 123 entries out of which only 11 finished in the money, securing a share from the prize pool. Online reg and the 2019 IPC award winner Amresh Kumar aka ‘Termi’ triumphed the night after defeating Harsh Bubna aka ‘harsh1327’ in heads-up and adding INR 56,600 in prize money. Bubna settled in the runner-up position for INR 39,000.

Other notable players to cash include Sandeep Varma aka ‘effuno’ (3rd), Mukul Janbandhu aka ‘GanpatRao’ (6th), Raj Kumar Gahlot aka ‘Fireman’ (8th), Akash Shekhar aka ‘K9_A’ (10th) and others. For the latest updates on live and online poker tournaments around the world, keep reading GutshotMagazine.com and stay tuned!