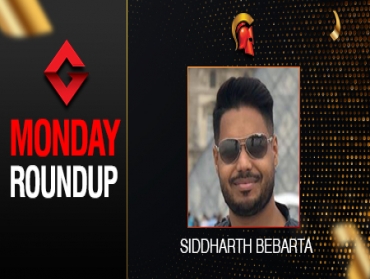 
After a thunderous Sunday, Monday was relatively slower with less lucrative tournaments on the leading platforms of the country. The biggest guaranteed event was Spartan Poker’s ReCharge promising INR 12 Lakhs in prize pool. Other than that, PokerBaazi’s Bout and Inception on Adda52 did pretty well guaranteeing 10 Lakhs each. Here is a complete summary of Monday majors…

Monday on Spartan Poker is reserved for ReCharge INR 12 Lakhs GTD and yesterday garnered 624 entries with each one paying the INR 2,200 buy-in. This number proved to be enough in order to cross the advertised guarantee and generate a slightly bigger prize pool of INR 12.48 Lakhs. After 7+ hours of an intense grinding session, it was online reg Siddharth Bebarta aka ‘Schrodinger’s Cat’ who defeated ‘honey339’ in heads-up.

The tournament reached level 50, and Bebarta (A♣ T♦) with 6 million chips was up against ‘honey339’ (9♠ T♠) with 1 million chips in what became the final hand. Pre-flop saw the latter putting his entire stack in the middle to get a call from the former. The board immediately opened 7♦ K♠ 3♦ 8♦ 7♣ and both players drew a pair of Sevens from the board, with Bebarta winning with Ace kicker, and taking away the title of the night eliminating ‘honey339’ in the runner-up position.

PokerBaazi hosted The Bout INR 10 Lakhs GTD which attracted a total of 456 entries after paying INR 2,750 per entry. The assured amount was surpassed to create a prize pool of INR 11.40 Lakhs which was later distributed to the top 54 places. But the one to take away the largest chunk of the same was ‘Imperative’ who knocked out Mrinal Manna aka ‘booyah’ in heads-up to secure INR 2.29 Lakhs. Manna managed to take home INR 1.60 Lakhs for finishing in the second position.

Other notable players to cash include Sahil Mahboobani aka ‘ImHighIshove’ (4th), Arjun Kochhar aka ‘Smoothie12’ (9th), Shardul Parthasarathi aka ‘duuurrrr’ (17th), Kanishka Samant aka ‘Highness’ (26th), Guneet Kwatra aka ‘guntz’ (53rd) and so on.

An anonymous player ‘BOSS10’ took down Inception INR 10 Lakhs GTD on Adda52 last night. INR 3,500 was the buy-in that eventually led to the creation of INR 10.30 Lakhs in the prize pool. ‘BOSS10’ defeated ‘TheRedWaste’ in heads-up to secure the first-place prize money INR 2.57 Lakhs while the runner-up settled for INR 1.56 Lakhs.

INR 3,300 was the buy-in to enter PokerStars’ Monday Hustle INR 5 Lakhs GTD. The event saw 157 entrants out of which only 27 finishers could acquire a share from the prize pool but the player to seize the largest chunk was Partho Dutta aka ‘SpidermanIndia’ who outlasted Kapil Arora aka ‘racemonk’ in heads-up for INR 1.01 Lakhs in prize money while Arora added INR 75,363 for settling in the second position.

The top 27 places to cash included Sahil Mahboobani aka ‘inaboobham’ (8th), Anuj Yadav aka ‘brockLesnar95’ (15th), Kaushik Tibrewal aka ‘breadbutterjam’ (23rd) and others.

9stacks hosted Hercules INR 2 Lakhs GTD displaying a buy-in of INR 2,200 and fetching 97 runners. After several hours of grinding the money reached the top 9 players, each securing a share from the final prize pool. Capturing the title along with the first-place prize money was ‘donkeyking’ who pocketed INR 58,000. The winner beat Sarthak Jain aka ‘Sarthakjain’ in heads-up who walked out with INR 40,400.

Chirag Khandelwal aka ‘BadSirck’ (3rd), Amresh Kumar aka ‘Termi’ (6th), Aravind Raju aka ‘BenDingBuLLets’ (8th), Mukul Janbandhu aka ‘GanpatRao’ (9th) each one also earned a share from the prize pool. For the latest updates on live and online poker tournaments around the world, keep reading GutshotMagazine.com and stay tuned!