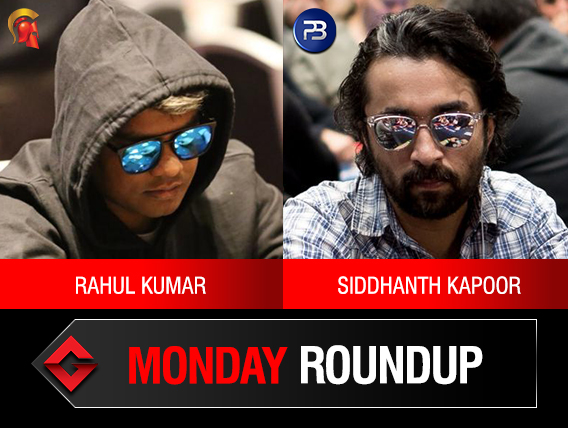 
Sunday witnessed a dearth of events and the guarantees sky high! After a smashing start to the week, Monday paled in comparison, knocking with smaller prize money. Yet the poker fanatics took their seats to excel and walk out, bagging their hard-earned money. Headlining the online roster was Spartan Poker’s ReCharge INR 10 Lakhs GTD followed by PokerBaazi’s The Bout, once again, ensuring INR 10 Lakhs. So, let’s take a quick tour of Monday majors…

With the commencement of working week, Spartan Poker’s ReCharge INR 10 Lakhs GTD attracted a pretty good field of 517 entries for a buy-in of INR 2,200. The guarantee was passed to create a bigger prize pool of INR 10.34 Lakhs, and the top 47 competitors benefitted from the same. But it was circuit reg Rahul Kumar aka ‘sttoned’ who had his eyes on the lion’s portion of the same. Kumar seized the winner’s prize money after railing out his opponent ‘gogobhai’ in heads-up.

Other notable players to finish in the money include Ayan Ray aka ‘interlalia_1’ (5th), Himanshu Dwivedi aka ‘Chanky’ (8th), Arjanveer Singh aka ‘bazzingaa’ (9th), Anuj Laddhad aka ‘Anuj16101’ (21st), Rishi Gupta aka ‘BollywoodNight’ (30th) and so on.

It was a night to celebrate for the prominent circuit grinder Siddhanth Kapoor aka ‘Bullzeye’ who triumphed last night’s featured tournament, The Bout INR 10 Lakhs GTD on PokerBaazi. The event pulled out a star-studded field of 224 entries, each one of whom paid a fixed buy-in of INR 4,400. Kapoor earned the winner’s title after defeating ‘Royalsagar’ in heads-up and secured INR 2.35 Lakhs, adding another major victory to his poker career.

Adda52’s Monday major was Inception INR 10 Lakhs GTD which attracted 320 hopefuls for a buy-in of INR 3,500. The advertised guarantee slightly surpassed giving rise to a bigger prize pool of INR 10.27 Lakhs. Before the winner was announced, the top 34 places strolled out with a min-cash of INR 7,190. However, the last man standing was Bhavyajeet Rathore aka ‘brbhavya’ who eliminated ‘shanky92’ in heads-up for INR 2.56 Lakhs in prize money. The runner-up managed to bag INR 1.55 Lakh.

INR 3,300 was the buy-in for Monday Hustle INR 5 Lakhs GTD on PokerStars which registered 150 players in total. And last night, the competition halted after the players struck a 3-way deal and with ‘dev149’ carrying the largest stack was announced the official winner, securing the first-place prize money of INR 88,560. The winner pushed away ‘AceConsultant’ to the second place for INR 77,563 and ‘hzgod’ to the third position taking away INR 76,923.