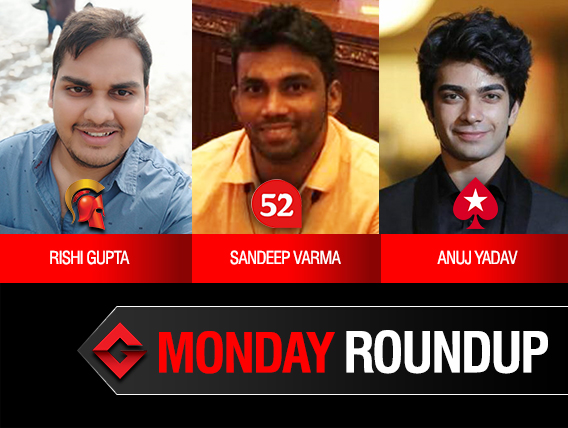 
Mondays mostly see lower guarantee tournaments offered across the leading online felts of the country yet the thrill among the poker fanatics continued! Spartan Poker’s Monday popular tourney ReCharge assured plenty in prize pool. PokerBaazi’s The Bout promised INR 10 Lakhs GTD, Adda52’s Inception offered INR 10 Lakhs GTD and so on. And here you can take a glance at the winners of yesterday night…

Spartan Poker’s headlining tournament ReCharge INR 14 Lakhs GTD fetched 783 entries after each paid INR 2,200. Out of this number, the top 71 players finished in the money locking at least INR 5,950 as min-cash. It was online reg Rishi Gupta aka ‘BollywoodNight’ who defeated Sreeharsha Boneni aka ‘yUDdam’ in heads-up to add another title to his poker cabinet.

A total of 399 entries were drawn to PokerBaazi’s flagship event, The Bout INR 10 Lakhs GTD last night. Each player paid INR 2,750 as buy-in amount and the final prize pool was taken away by the top 9 finishers. Coming out on top was ‘jayesh712’ who defeated Ayan Ray aka ‘interlalia_1’ in heads-up to secure INR 2.10 Lakhs as first-place prize money. Ray captured INR 1.47 Lakhs after settling in the second position.

Adda52’s Monday tourney Inception INR 10 Lakhs GTD kicked off at 8 pm and a total of 386 entrants pounced on the field after paying INR 3,500 which crossed the advertised guarantee to create INR 12.35 Lakhs in prize pool. The top 43 players took home a share from the same. Topping the field and grabbing the title was online reg Uttam Kumar Sinha aka ‘chinunew’ who eliminated Arsh Grover aka ‘BigggTymeR’ in heads-up for INR 3.06 Lakhs in prize money. Grover seized the second-place payout of INR 1.85 Lakhs.

Another tournament on Adda52 that kicked off at 10pm last night was Hexagram INR 2 Lakhs GTD. After chipping in INR 2,200 each, a total of 132 entries joined the field out of which only 13 battled to finish in the money. Outlasting the field was Sandeep Varma aka ‘effuno’ who defeated ‘Sagar28389’ in heads-up. Varma pocketed INR 75,240 in prize money while his opponent secured INR 50,160 for the runner-up position.

Monday’s major attraction on PokerStars’ was the Monday Hustle INR 5 Lakhs GTD which attracted 192 runners after each paid INR 3,300 as buy-in. This number generated a prize pool of INR 5.76 Lakhs whose biggest share was secured by circuit popular Anuj Yadav aka ‘brockLesnar95’ who railed out ‘s291405’ in heads-up. Yadav took home INR 1.14 Lakhs as the winner’s prize money and his opponent went out with INR 85,393 for the runner-up position.

9stacks (Signup Code ‘GUTSHOT’) hosted Monday Knockout INR 1.50 Lakhs GTD which kicked off at 8 pm last night garnering a total of 75 entries out of which only 9 took home a share from the final prize pool. Powering through the field was ‘TonyMontana’ who defeated ‘GauravTheGrinder’ in heads-up for INR 22,039 in prize money.