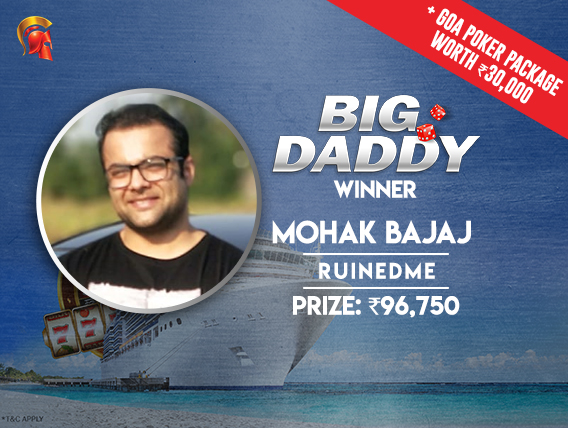 
The exciting Big Daddy tournament of The Spartan Poker is receiving a good response from poker players across the country. Last night saw a Goa based poker player Mohak Bajaj playing under the moniker ‘ruinedme’ claiming the Big Daddy event last night for INR 96,750 along with a Goa poker package worth INR 30,000.

Bajaj outlasted 761 entries in the tournament where he defeated Dhaval ‘ABD17’ Lekhra in the heads-up battle. Lekhra took home INR 61,000 for the finish. The prize pool was distributed to top 63 places with a min-cash of INR 2,175.

29-year old Bajaj has done his engineering in IT and was brought up at Saharanpur. He was introduced to poker by his friends where he started 7 years back with small-stakes cash tables. Now too, he is mainly into cash tables only. Speaking about the tournament, “Well the field was tough, my game was spot on and the poker gods were generous.”

Key hands from the tournament – “Was running 64 of 67 after my KK got busted by AQ, after that it was an uphill battle before I finally shipped it.”

Adding about future poker plans, he said, “I am a regular cash game player. I play at Goa casinos for now but probably looking forward to play on international platforms as well like Macau or I must say Sri Lanka. And of course, Las Vegas is the ultimate destination. Hope I keep running good.”

Coming back to the tournament, the winner was announced in Level #43 with blinds running 35,000-70,000-7,000. ‘ruinedme’ had Ah 3d and ‘ABD17’ was holding 3s Kc. Both the heads-up opponents went all-in to see the showdown. The board ran 9s 4d Qc 9d Ad where ruinedme shipped the tournament with two pairs, Aces and Nines, and also the first-place prize.