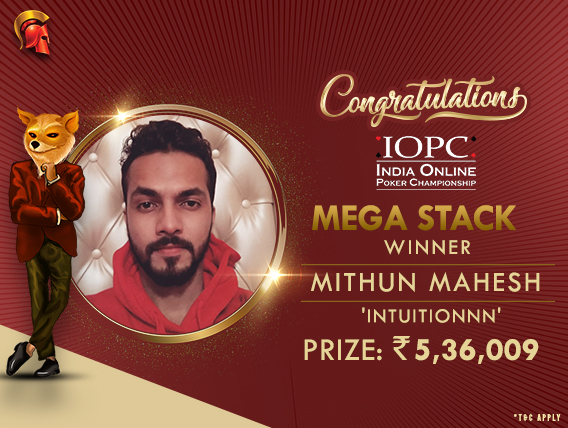 
With the inauguration of this edition’s India Online Poker Championship (IOPC) on 11th January 2019, the year began on a very joyous note. The series, having a total GTD of over 8.5 Crores, is one of the highly anticipated poker events of 2019.

Yesteday was saw Day 5 of the IOPC being hosted on The Spartan Poker. The platform hosted a total of 5 tournaments under IOPC yesterday, out of which the biggest of them all was Spartan’s feature tournament of Tuesday, Mega Stack INR 20 Lakhs GTD.

The Mega Stack was the penultimate tournament for the day and attracted a colossal 933 entries, making it a highly competitive affair. The entries collectively crushed the guaranteed amount by a huge margin of almost INR 8 Lakhs! The ultimate prize pool came to INR 27,99,999.

The player to emerge victorious yesterday was a known online grinder Mithun Mahesh aka ‘Intuitionnn’. He took home a huge pay-check of INR 5,36,009 for his awesome 1st place finish beating ‘StackSteel’ in heads-up. The runner-up also bagged a sizeable cash prize of INR 3,33,641.

In the final hand of the tournament, the eventual winner Mahesh shoved with Js Tc, having almost 4:1 chip lead. His opponent called with Ac Qs. The board ultimately rolled out Th 3c 7d 6s 7s and Mahesh won with two pairs – Tens and Sevens.

Gutshot got in touch with Mahesh, who is a PokerGuru Staking member (formerly known as AceJack Stable), and he had this to say about his win, “I think I played all the spots correctly and ran hot, eventually taking it down. It was a great experience overall competing in IOPC.”

He first came in the limelight when he shipped Spartan’s Little Big Series Main Event for a little over a Lakh back in 2017. He subsequently moved up in stakes on Spartan by shipping their feature tournaments, The Flash in May 2018 and Mega Stack in June later. This shows how he has grown over the past year and he’ll be hoping to ship more tournaments in the future with this fresh addition to his bankroll.

The IOPC successfully ended the day yesterday where almost every tournament surpassed its guarantee. The crown jewel of the series, the Main Event of 1.5 Crores GTD, is scheduled to take place on 20th January and every player’s calendar is already marked for this much awaited tournament. Keep reading GutshotMagazine.com for first results and updates of IOPC as well as general poker news from around the world.