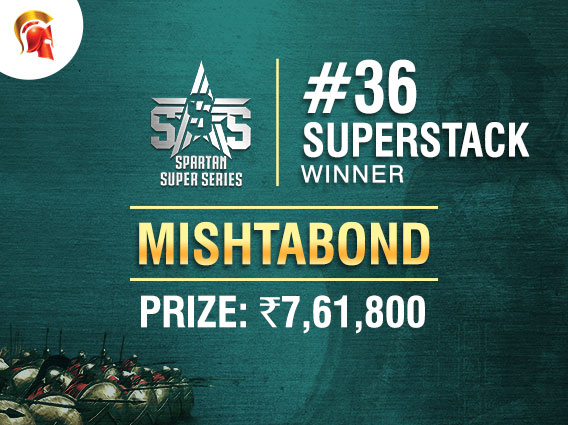 
As poker players in India, everyone looks forward to the Sunday grind, where all the major poker companies host major tournaments with big guarantees, as most players have free time on Sundays. The Spartan Poker, in particular, had several big tournaments yesterday, marking the end of the 7-day long Spartan Super Series (SSS), with Dhawal Lachhwani shipping the Main Event for INR 20+ lakh.

A lot of other tournaments were also held on Spartan yesterday, with one being the Sunday SuperStack, a featured tournament that had a buy-in of INR 5,500 and a guarantee of INR 25 lakh for the SSS. The tournament kicked off at 7:30pm IST and went on for 7 hours and 54 minutes before a winner was crowned.

A vast field of 586 entries registered to the tournament, which took the prize pool up to INR 29.3 lakh and the top 60 players shared this, with a minimum cash of INR 11,720. Beating them all and taking down the Sunday SuperStack title was ‘Mishtabond’, who won the massive first-place prize of INR 7,61,800.

While most of the top pros were playing the Main Event, this tournament was a good chance for some of the lesser known players to register a big score, and that’s exactly what this player did, beating ‘saaho’ in heads-up, who also took home a pretty handsome prize of INR 4,68,800 for second place.

Before the final hand took place, the players were almost similar in chips, with saaho finally shoving all-in with Jacks after the flop opened 7d 2h 4s. However, Mishtabond made the call, revealing 7s 4d, and immediately taking the lead. saaho didn’t get any more assistance as the turn and river opened As 6d, and Mishtabond took down the title and the top prize, with two pairs – Sevens and Fours.

Keep reading GutshotMagazine.com for similar reports on the biggest poker tournaments in India and across the world.