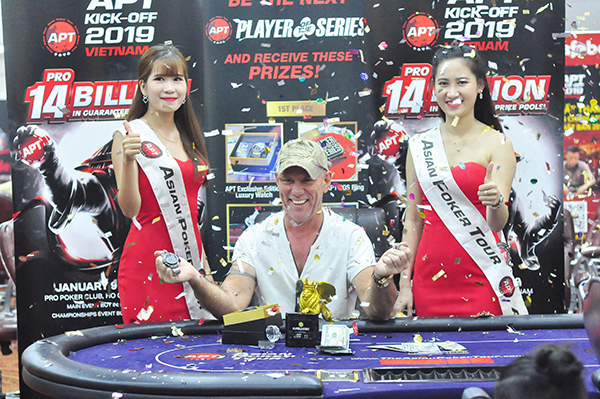 Michael Kim Falcon is the APT Player of the Series


The 12-day APT Vietnam 2019 Kickoff series is in the books. Nearly 3,800 entries were made by players from different parts of the world and a total of 42 countries were represented. India’s Abhinav Iyer won the Main Event and held the tri-colour high. With the series’ end it’s time now to see who has won the prestigious series’ Player of the Series’ (POS) race.

The winner of the first event of the series was Danish pro Michael Kim Falcon who won the Monster Stack 1 for VND 383,346,000 and instantly took the top position in the POS race. He proceeded to run deep in multiple events following that. In the High Rollers Single-Day event, he came 5th for VND 92,664,00 and gained 138.53 points for it. He then followed it by coming 3rd in Short Deck Single Day and bagged another 180.24 points there.

The Deep Stack Turbo and High Rollers events saw him again finishing in the money both at 5th place. In total, Falcon won 1098.34 points. He even bagged an exclusive wrist-watch, the APT POS customized ring, trophy and $800 for his achievements.

Falcon is very well known in Asian circuit and is settled there. He has played live in places like Ho Chi Minh City, Manila, Macau and Cambodia. The Millionaire Maker event in 2017 WSOP saw him finishing 59th for $18,714. His best live cash came in PokerStars Festival Manila Main Event in August 2017 finishing 3rd for $48,714. Among his well known achievements is shipping CoinPoker (a cryptography based poker site) HR event in APT Manila in September last year for $25,269, making it his second biggest live score.

The Danish pro has made yet another mark in the Asia-Pacific region and will be looking at a few more wins with the successful run made in the Kickoff series this early in the year. Lim Yohwan, the APT Championships event winner, finished 2nd in the POS race with 1,032.56 points. He also won 1 title and 4 other tournament finshes in the money, just like Falcon. India’s Abhinav Iyer ranked 4th with one tournament win and 899.18 points.

Keep reading GutshotMagazine.com for more tournament updates, results and for your daily dose of general poker news from around the world.