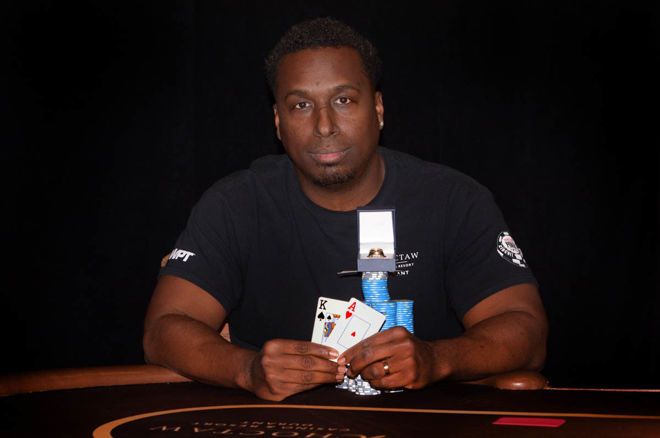 
While the poker industry is heavily scheduled with some of the biggest tournaments taking place around the world. One cannot miss out on the World Series of Poker (WSOP) Circuit underway at Choctaw Durant and the 39-year old Maurice Hawkins continued his dominance by taking down Event #5: $400 No-Limit Hold’em on Monday capturing his 14-career WSOP Circuit gold ring, extending his lead atop the all-time ring list!

The fifth event and the single-day tournament recorded 218 players, each one enrolled for a buy-in of $400, gradually producing a prize pool of $71,940 in Oklahoma and Hawkins seized his prize money of $16,898 along with his record-breaking WSOP gold ring.

After hours of grinding session, Hawkins became the chip leader going into the nine-handed final table, having 1.16 million chips while Andrew Robinson had just 440,000 chips and none other seven players had more than 300,000 chips. Eventually, the tournament came down to Hawkins and seven-time Circuit winner Robinson but ultimately the latter’s A-Q succumbed to the former’s A-K and the entire tournament wrapped up with the announcement of the all-time leader!

“We’ve been playing some pots the last two days,” says Hawkins “I would probably say he is one of the best players here. It’s no shock that every time I get to a final table, Andy Robinson is at the final table.”

With total live earnings of over $4 million and this win puts him ahead of his nearest two competitors in the race for the rings, with Valentin Vornicu with 12 rings and Josh Reichard also winning 12 rings, being the only other player to surpass 10 victories in WSOPC events. After 2019 May, when he took down Event #8 Monster Stack at Horseshoe Tunica for his 13th ring, this is Hawkin’s first WSOP Circuit gold ring triumph. However, his best winning stretch was 2015 to 2017, when he bagged three rings in each of the two Circuit seasons.

“Feels good. Feel like I got my mojo back,” said Hawkins “Feels good to know that the beginning of the year is going to end like it should, which means, that when you start the year off winning, it only can get better. It’s time to go up,” the champion continued “I was just kind of sitting there, got around 25 bigs, and then it was like poker time; ‘Let’s do this; Let’s make some things happen.”

So, for the latest updates on poker news and tournaments around the world, keep reading GutshotMagazine.com and stay tuned!