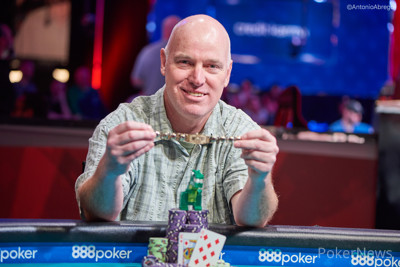 
Here’s another unique tournament at the 2018 World Series of Poker; one that is dedicated only to senior poker players. Last year, the minimum age restriction to be able to participate in this event was 65 years, with Frank Maggio topping a field of 5,389 entries and winning over $600k.

This year, the minimum age was dropped from 65 to 60 and a record-breaking field of 5,919 entries was recorded, creating a prize pool of $5,327,100. Just 8 players went on to play Day 4 of the event and it didn’t take too long on the final day before a winner was crowned – USA’s Matthew Davis.

Davis first played a live poker tournament over a decade back but prior to this win, he had only successfully managed around $50k in live poker winnings, but it all changed at the World Series. His two previous WSOP cashes came in 2007 and 2009, with a combined value of less than $8,000.

He registered himself into Event #32: $1,000 Seniors NLHE Championship and 4 days later, he was presented his first ever WSOP gold bracelet, having beaten 2012 final tabler Bill Stabler in heads-up. His efforts also made him richer by a whopping amount of $662,676 (~INR 4.51 crore).

“Honestly, during the dinner break, I just went and enjoyed time with my family and friends. We talked about other things, and when they asked me about poker I just said not now,” said Davis after this win. He was considerably behind in chip counts during the break but did well to stage a turnaround in a matter of around 15 hands.

Keep reading GutshotMagazine.com for alerts on similar wins from the 2018 World Series of Poker.