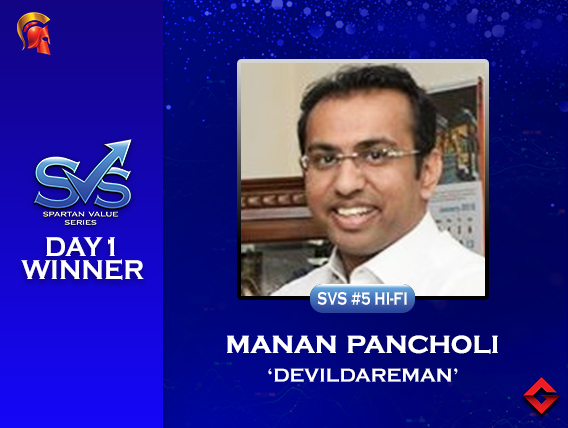 
Always known to come up with exciting and varying designs, Spartan Poker March kicks off with Spartan Value Series (SVS). By now you know that SVS is specially designed for the low/mid-stakes players who have an incredible opportunity to boost their poker bankrolls. This 5-day long tournament series assures INR 66+ Lakhs scattering before you 24 events. Well, Millionaire has to be a part of the SVS, so, Spartan is here with Millionaire Lite INR 35 Lakhs GTD! And here is a complete summary of SVS Day 1…

The buy-in won’t get lower than INR 110 and the first SVS tournament of the month kicked off with 545 runners. The tournament collected a bigger prize pool of INR 54,500 and the top 39 finishers ended up earning for their efforts. After several hours of grinding it was ‘bml2012’ coming out on top to take home the first-place prize money after the players struck a 6-way deal which saw ‘Vodafone77’ earning the second-place payout.

The second event began at 3 pm and a total of 337 runners registered after paying INR 220. The top 27 finishers earned a share from the final prize pool, however, the one to grab the largest chunk of the same was ‘Kumaran123’ who railed out ‘RunLolaRun’ in heads-up to secure INR 14,929.

In level 33 of the tournament, ‘Kumaran123’ with 9♦ K♣ was up against ‘RunLolaRun’ with 9♣ 7♣. The board eventually opened T♠ 5♥ 8♥ Q♦ J♣, and that’s when ‘Kumaran123’ triumphed the tournament with his higher straight railing out his opponent in the runner-up position.

Powering through the field was ‘Sat567’ taking down the third tournament of SVS Day 1. A total of 240 entrants pounced on the field after paying INR 165 individually. It was in level 28 when the players settled for a three-way deal which saw ‘paisenikalbc’ ending the runner-up position.

Both the buy-in as well as the guarantee increased to become INR 880 and INR 2.20 Lakhs, respectively. A total of 271 entries joined the tournament out of which only the top 27 finishers locked a min-cash for their efforts. Once again, ‘RunLolaRun’ finished in the second position after ‘Zohaan’ dominated with his full house and ‘RunLolaRun’ failed to overtake him with his flush.

Finishing 3rd in February’s Millionaire Lite Manan Pancholi rode past the field last night to add a valuable title to his poker CV. Day 1 of SVS concluded with the last tournament being Hi-Fi pulling out a total of 506 entries for INR 550, enough to surpass the advertised guarantee and create INR 2.53 Lakhs in prize pool. The top 47 places received a min-cash of INR 1,442. Pancholi playing under the username ‘Devildareman’ outlasted Dhinesh Kumar aka ‘kendralust’ in heads-up with his two pairs of KKTT.