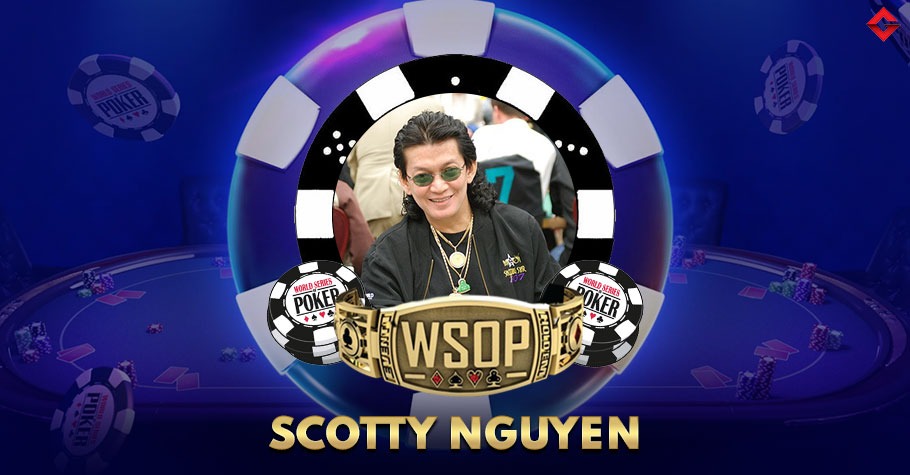 
There have been several players who have won the World Series of Poker (WSOP) bracelets. Each one of them has their unique story of struggles and hardships. One such story is that of Vietnamese American professional poker player Scotty Nguyen. His journey to winning five WSOP bracelets includes struggle, success, fame, addictions, losses, tragedy, you name it. But one thing that never left Nguyen was the mighty game of poker!

Nguyen has five WSOP bracelets and one World Poker Tour (WPT) title under his belt. He has total live earnings of $12,700,229 and ranks 65th on the all-time money list. He also has 46 ITM finishes at the WSOP.

Nguyen was born in Nha Trang town of Vietnam. A few years later his mother sent him to Taiwan due to the conflict in Vietnam. He later moved to the United States after finding a sponsor in Orange County, California at the age of 14. He ended up being expelled from school for spending too much time in underground poker games.

In 1985, he was invited to Lake Tahoe to deal in a no-limit Hold’em tournament and that’s where the stars aligned for him. He started dealing during the day and playing cash games all night. There he gradually built a strong bankroll of $7,000. The confident Nguyen moved back to Vegas and gambled to build a bankroll of $1 million. Soon, he shot to fame among the masses in Vegas and he was playing with pros like Johnny Chan, Puggy Pearson, and David Grey. His good run in the game led him to buy a Chevrolet Camaro for $17,000, a Corvette for $21,000, and a condominium for $60,000 all in cash. He started living in the luxurious Caesars Palace and started winning $50,000 to $900,000 each night.

But with wealth and fame, came some bad habits too. He started consuming marijuana, cocaine, and alcohol recreationally, however, they turned into full-scale addictions. He once lost a costly game and went so broke he couldn’t afford accommodation. The casino spared him a room and $5,000 in cash.

He had to start from scratch and build his bankroll once again. He won the $2,000 Omaha 8 or Better event, cashing over $150,000 at the 1997 WSOP. It seemed like Nguyen did not learn from his mistakes and again ended up exhausting his bankroll before the 1998 WSOP. He did not even have enough money to play the satellites, however, Mike Matusow saw the potential in Nguyen and sponsored him 1/3 of the buy-in.

All the stats in this article are updated as of 29th March 2022!

He won the 1998 WSOP Main Event and split 1/3 of the winnings with Matusow. The joy of his historical victory was hampered the very next day when he lost his brother to a tragic accident in Vietnam. Nguyen avoids wearing that bracelet due to the tragedy.

During the 2008 $50,000 WSOP H.O.R.S.E. event, Nguyen displayed inappropriate behavior such as drinking during the broadcast and swearing at the casino staff. He won the event, however, his behavior drew a lot of criticism from commentators as well as fans. He first issued an apology stating that the event’s editing depicted him in a negative light and that he was exhausted, frustrated, and under pressure to succeed. Later in an interview, he formally apologized saying he no longer blamed any other players for his behavior and that there was no excuse for his behavior. Nguyen has refrained from drinking alcoholic beverages during televised games following that incident.

Nguyen is known for playing the game with a lot of emotions. In January 2012, he headed the Expekt Poker pro team which included Julian Kabitzke, Andre Klebanov, and Jack Salter for EPT Deauville.

Nguyen’s story is an example of how fame shouldn’t get over to our heads and that the passion for what you love should never dwindle.