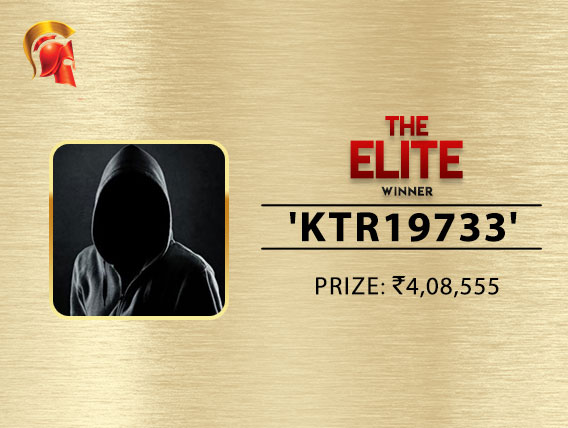 
It was only yesterday that we spoke about skill being such a major component of poker that you keep seeing many of the regs making final tables and title finishes on a regular basis. This time around it was Friday evening’s Elite tournament at The Spartan Poker whose final table was filled with many known names from the domestic circuit. Coming out on top of them all was ‘Ktr19733’ who claimed the title after doing a heads-up chop with Arjanveer ‘instrumental’ Chadha.

It was a prizepool of 18.5 Lakhs (original guarantee was 18 Lakhs) that players were battling for in this tournament where 108 entries ponied up INR 11,000 to participate in. Min-cash was INR 33,300 and the top 14 players took home at least that much. Yesterday’s Flash winner Anirban Das just missed out on making the final table of this 6-max tournament busting out courtesy the eventual winner who had a bigger flush. His 7th place finish netted him a payday of INR 86,025. That brought us to the final 6, the first of whom to bust out was Ashish ‘Spewushhhiiiii’ Ahuja, another player who has been in red hot form. Ahuja recently won his first Highroller tournament at PokerStars India along with a number of other titles in recent weeks. Sumit ‘mrgr33n’ Sapra was the 4th place finisher (INR 1,72,975) who took down yesterday’s Summit tournament at PokerBaazi. Goonjan Mall who plays as ‘gmtesting’ took the second runner-up spot for a payday of INR 2,13,675.

Ktr19733 was responsible for the ouster of Mall and with that elimination we got into headsup. Not too much of a difference between the two stacks but Ktr19733 did hold the lead with a 1.5 million stack over instrumental’s 1.2 million stacks. After just 2 smallish pots both players decided to split of the remainder of the prizepool and with his slight lead Ktr19733 took the bigger share of the prizepool (INR 4,08,555) and the Elite title. For his runner-up finish, instrumental took home INR 3,89,719.

Stay tuned to GutshotMagazine.com for coverage from another Spartan tournament, the Triple Bubble!