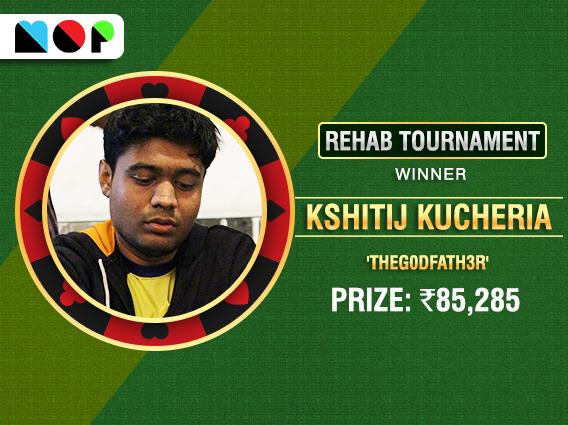 
Sunday, October 7th, marked the debut of MadOverPoker’s marquee high value monthly tournament – REHAB. The tournament was announced late last month, and it guaranteed a prize pool of INR 5 lakh, making it MOP’s biggest prize pool they have offered. As expected, it pulled a lot of attention from players and saw a decent number of people participating in the tournament.

The tournament started at 4pm on Sunday and guaranteed a prize pool of INR 5,00,000 with an entry fee of INR 1,500. The tournament saw a total of 356 entries which despite being a high number, was not able to break the guarantee. A total of 46 positions were paid a minimum sum of INR 2,000.

The tournament went on till 9:45 pm when the last 3 people on the table made a 3-way deal to mark the end. The winner of the tournament and the chip leader at the time of the deal being made, who took home the top prize was Kshitij Kucheria aka ‘TheG0dfath3r’. He got a sum of INR 85,285 while the second place was not bad either as he got INR 75,704.

Kshitij is a 22-year old player who has been playing online poker since the last 10 months and professionally since the last two months after his big win in the PSL Season 2 with the ‘Goan Nuts’ in May 2018.

Gutshot managed to get in touch with Kshitij, who has been thankful to Dhaval Mudgal and the Goan Nuts team to have always supported and mentored him throughout; his parents and also his friends, Aditya Choudhary and Vishal Bajaj. We asked him a few questions regarding the same:

Q. How was your experience playing the Rehab tournament?

“This was actually my first tournament on MOP. I registered on MOP on Sunday specifically for this high-value tournament. I will definitely play it in the upcoming weeks to come.”

Q. What was your game changing moment in Rehab?

“I actually don’t remember a specific spot as such in the early stages, you know because I was multi-tabling on the Big Sunday. I do remember getting out of the tournament on my First bullet in which I had flopped a Full House and my opponent clipped a 3-outer to make a better full-house on river. I re-entered and played my usual game and started focusing once I was on the FT. I reached FT with a position of 6/8 and people immediately started to talk of a deal there. I felt I had an edge over others, so I continued playing.

People were over-folding and I managed to develop a healthy chip-stack. I knocked out 3 players in succession and gained the chip-lead. I then lost a big flip and again went on to build my stack. I flipped again and this time I won. Knocking out players was obviously fun. People again started of talking about a deal and I thought of accepting it to reduce variance and also to focus on other 2 final tables I was at. One guy wasn’t agreeing to a 4-way deal and I knocked him out too with standard pre-flop shoves. We than closed it with a 3-way deal when I was getting the highest score so far of my life.”

Q. What are your plans with your Rehab winnings?

“No particular plans as such. I am a regular player, so this is obviously going in my poker bankroll. I might rest/chill for a day or two and then start grinding again. Thinking of gifting myself with a new laptop.”