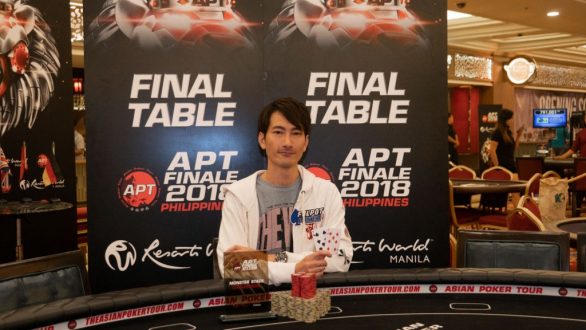 
The Asian Poker Tour (APT) 2018 Finale Manila was the company’s last stop of the year, with a total of 19 tournaments (16 side events, 1 special event, Main Event and Championships Event) scheduled between 27 November and 6 December 2018. Yesterday was the final day of the series and four tournament winners were crowned on this day.

One of the tournaments to conclude yesterday at Resorts World Manila was Event #13 PHP 27,500 Monster Stack 2 million GTD. The 2-day tournament pumped in a total field of 117 entries and this took the prize pool up to PHP 2,837,200, from which the top 20 players would get a piece of the pie. As we reached the Final Table, history was made as David and Joshua Chargualaf became the first ever father-son duo to make the FT of an APT event.

The series was a good one for Indian players, after Amanpreet Singh earlier won a title and in the Championships Event, Aditya Sushant made a deep run to end in 4th position. Both these players decide to participate in the Monster Stack as well, and both cashed out.

Even though they missed out on bigger prizes, both would be proud of these deep runs and their overall performances in the series, with Amanpreet Singh cashing twice in the series to finish with 447.72 points and ending 15th on the APT Player of the Series Standings. Sushant also had two cashes with 379.61 points, ending 21st on the leaderboard.

Coming back to the Monster Stack tournament, it was Japan’s Kosei Ichinose who ended victorious from this field, taking away his second title of the series while also bagging the fat first-place pay-check of PHP 693,400. He also ended at the top of the APT POS race, with two titles, four cashes and 1,001.85 points. Pretty impressive!