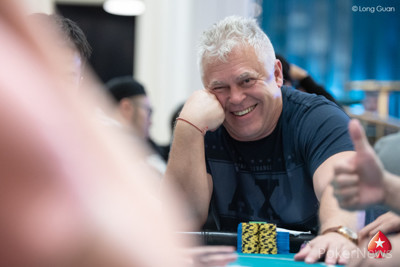 Konstantin Pogodin takes lead at APPT Korea ME Day 1B

359 entries registered on Day 1B, adding to the 222 entries of 1A, making a combined field of 581 entries, which ensured this became the largest ever APPT Korea Main Event; it also narrowly missed becoming the largest on Korean soil itself. 94 survivors advanced from this flight, joining the 59 survivors from 1A.

PokerStars Team Pro and the very popular Celina Lin was among the top names to progress, finishing with a bag of 186,500 chips, and ending within the top ten chip counts. However, the chip lead was taken by Russia’s Konstantin Pogodin, who takes away a heavy bag of 359,500 chips. No one else crossed the 300k mark for the day.

Among the top names to progress was also Randy Lew, who was also a PokerStars ambassador right until yesterday. The pro quit the brand after nearly a decade and here, has progressed with a stack of 113,000. For Team India however, it wasn’t the best of days. Yasheel Doddanavar and Meherzad Munsaf both tried again on Day 1B but were unfortunate to not progress once again.

Keep following GutshotMagazine.com for all updates from the APPT Korea as well as other gaming updates from around the world.