The Natural8 GGPoker Spring Festival 2021 concluded on 25 April. The highly anticipated Main Event was shipped by player ‘KingKongJoel.’ The winner from Austria took the top prize and won USD 1,133,634 after a heads-up deal. He was followed by Zuang Ruan from Japan and ‘Lucky-Lucky’ from Ukraine who cashed USD 9,52,195 and USD 6,70,296 respectively.

The action on the Main Event went on for a substantial amount of time post which the game was down to just 250 players. Top players like GGPoker’s ambassador Fedor Holz, Mikita Badziakouski, Lucas Greenwood were among the pros gunning for a win.

Post this, players like Niall Farrell, Adrian Maeteos, Luuk Gieles, Oleg Vasylchenko were in the top hundred. Farrell made it to the 38th place. David Peters left Indian poker pro Sriharsha Doddapaneni behind. The action on the final table slowed down a bit but it picked up pace again. The 16th position was bagged by ‘GotchEm,’ an Indian mystery player who cashed USD 36,485. 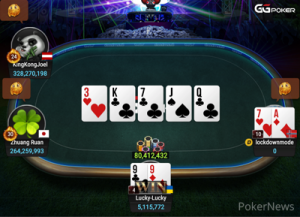 The action was soon down to three players, namely ‘KingKongJoel,’ Ruan and Lucky-Lucky. Lucky-Lucky shoved the small blind while Ruan called the big blind. Ruan had a J card and an Ace while Lucky-Lucky had 9 and Ace. As Ruan had the best hand among the two, he took the heads up lead.

The top two players who struck a deal were Ruan and ‘KingKongJoel.’ The Main Event came to an end after the break when Ruan had King-deuce while ‘KingKongJoel’ had four-five. The board was revealed as 9heart-8heart-Qhearts-10spade-4spade and Ruan could have tasted victory with his King-high card but ‘KingKongJoel’ eventually made it to the top as the river card was a four which had him have a pair card.