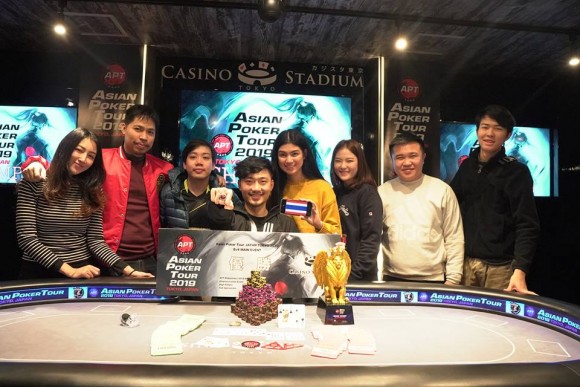 After first two flights hosted in the fist half of the series, Masahiro Kikuchi was leading in chip counts from Day 1B. From a total of 234 entrants to the event, the whittled-down field of 8 players were playing for the 1st place yesterday and some great poker ensured.

The champion Thanarattrakul hails from Thailand and has about $8k in live cashes till date, which he made from finishing 7th in 2018 PPPoker Festival Main Event, Taiwan. He has a few cashes till now, but since the prize here were tickets to the next biggest APT series. It will be worth his while since he’ll get to hone his skills further and make some deep runs too.

The 3rd place saw China’s Fu Jiangbin fill it, bagging an APT Philippines I ME ticket. The 4th place finisher was another Japanese player Kohei Iwaki who earned the same prize as Jiangbin. Only the top 4 positions were paid in the tournament. The APT Tokyo Championships Event is also in the books so stay tuned to GutshotMagazine.com for more details on it as well as for general poker news from around the world.