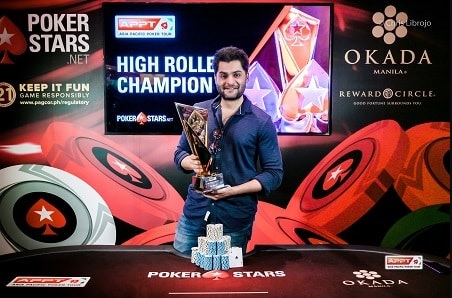 
Team India finished on a high note at the Asia Pacific Poker Tour’s (APPT) recently concluded series in Manila with Kanishka Samant taking down the Highroller title. The Php 200,000 buy-in event was the final event of the series and Samant walked away with all the glory, a handsome trophy along with a massive payday of Php 6.956,000.

This score is the official result however Samant actually took home slightly less following an unofficial headsup deal with his final opponent. This is Samant’s maiden title win on the APPT tour which will no doubt make it a sweeter win for the 30-something pro from Mumbai.

Samant is one of the most well known pros on the Indian circuit and with numerous cashes in the Indian and regional Asian circuit as well. Aside from this Highroller win, his most recent big title win came in the inaugural World Poker Tour’s India edition which took place last year. His win in the INR 20k side event there netted his a ~9 Lakhs payday. Samant also has the distinction of being the only player to win two Main Event titles at the India Poker Championship, one of the premier live tournament tours in the country.

It was a 175 player field that participated in the Highroller leading to an overall prizepool of Php 31.4 million (~INR 4.2 Crores). The tournament kicked off on Friday and culminated in the late hours of Sunday evening with 175 and the field trimmed down to 73 at the end of Day 1 action. Samant moved into Day 2 and had ample company in Sahil Agarwal, and WSOP bracelet winners Abhinav Iyer and Aditya Sushant. However by the time, the money bubble at 28th place was busted, Samant was the lone survivor in the field flying the tricolour.

Having busted outside the money in the Saturday SuperStack event, Samant was keen to make his mark at the final event of the series. And he did so in style making the final table first and then going onto win the title in due course. On a table with players from the rest of South East Asia and China, Samant built his stack playing solid poker. Eventually he went into headsup with China’s Ruihong Tao and both players reached a seal to split the final two payouts with Samant taking 87 Lakhs as his payout amount for the win. Tao would get ~Php 5.2 million (INR 71 Lakhs) for his runnerup finish.

Gutshot had a word with Samant after this major victory and he said, “I played a few tournaments leading up to the HR, but fell short of the money in the Kickoff and the SuperStack which was a bummer after grinding for hours. This was going to be the last tournament of the series and I decided to jump into it after seeing the numbers after my SuperStack bust out and pulled my sleeves for this one. I was certainly zoned in for this from the get go and was feeling confident. It feels special to close this one out finally for the team after my bud Sahil finishing in 2nd in the same last year.”

For more updates on poker tournaments from around the world, stay tuned to GutshotMagazine.com.