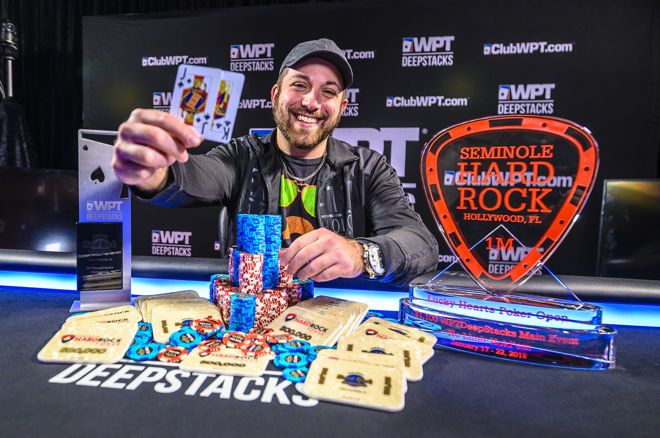 
The prestigious Seminole Hard Rock Café, Florida, has seen plenty of high-stakes poker action throughout its existence. The 2019 Lucky Hearts Poker Open (LHPO) also saw itself hosted in Seminole recently. The 13-day festival had 25 events lined up, with the $1,100 WPTDeepStacks Hollywood Main Event being the final and the biggest of them all.

The tournament attracted 1,634 entries. This is the 2nd largest turnout in WPTDeepStacks’ entire history. The tournament, drawing such a huge turnout, surpassed the guarantee and created a fresh prize pool of $1,584,980. The event ran for a total of 6 days with 3 starting flights and the winner to emerge from the grind was American pro Jason Young, taking home $263,205 (~INR 1.87 Crores) as 1st place cash money.

Young is a poker pro hailing from New York. His total live earnings crossed the $1 million mark after the WPTDS win. He is quite an accomplished player and has cashes from many big tournaments in the past across USA. This significant 1st place finish still isn’t his best. His best live score came in 2008 WSOP Shootout event, which he shipped for $335,565 and won the elusive WSOP gold bracelet. The player has added his 4th title win and will be looking to make new advances in coming time with this great bankroll addition.

Young told the onsite press after his win, “It’s been a long journey to get back here. There’s been a lot of stuff that’s gone on in my life over the last five to six years, that I didn’t think I’d ever be back in a position like this. I’m rarely speechless, and I don’t even know how to process my thoughts just quite yet about everything.”

The Final Table action took place on Tuesday where the 9 hopeful souls were all aiming for the 1st place finish. The field eventually whittled down to Young and his heads-up opponent Leif Force. Heads-up was a back-and-forth affair. Force doubled up quickly and took the lead and then Young doubled back. The final hand took place at Level 36 (200k/400k/400k).

Force raised to 1 milllion and Young called. The flop came to 9h 4d 2h. Young check-called Force’s 1.2 million on the Ks turn. Force again bet 2.2 million and Young check-raised it to 7 million and Force called. The river 8c completed the board, Young shoved and Force called his last 7 million with pocket Tens. Young had Kc Js and made a pair on the turn, making him the champion of the tournament.

Keep reading GutshotMagazine.com for more tournament updates and results like these as well as for your daily dose of poker news from around the world.