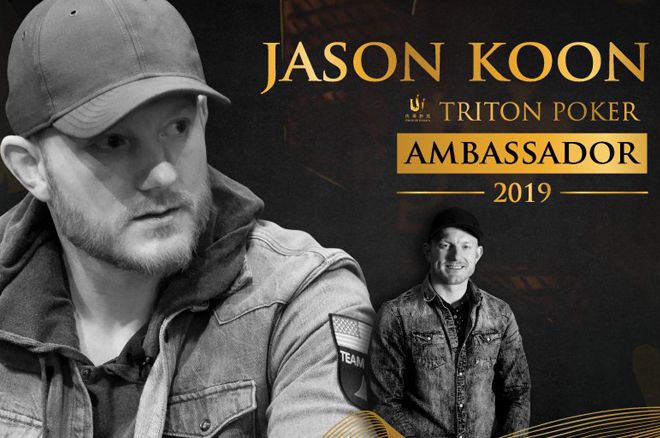 
American pro Jason Koon signed on as the Ambassador of the prestigious high-stakes Triton Super High Roller Series. Koon announced the news from his Twitter handle @JasonKoon. He said, “Last year @tritonpoker joined forces with @partypoker. This year I have personally joined Triton as an ambassador for the tournament series. In 2019 Triton will expand tournament stops. They will also be hosting the largest buy-in tourney in poker history! More updates soon!”

The Triton SHR Series is one of the most sought after high-stakes tournament series in the worldwide poker scenario and attracts the best of the bests from across the planet. It was founded by Malaysian businessman and amateur player Richard Yong. The series is usually hosted three times a year in various locations around the world.

The latest SHR series was hosted in Sochi where Mikita Badziakouski won the Main Event back-to-back. High-stakes grinders like Phil Ivey and David Peters are among the winners of Triton tournaments in the past. Phil Ivey won the first ever Short Deck tournament, hosted by Triton in May 2018. Peters won a Triton 6-Max event in July last year.

Jason Koon himself sent shockwaves in the industry when he won the biggest ever pot of €2.1 million at a cash table in Triton SHR series back in May 2018. In the same series held in Montenegro, Koon won the Short Deck tournament for over $3.5 million, making it his career best live score.

Koon, a professional player from West Virginia, currently has upwards of $23.3 million in live earnings and ranks 13th in USA’s All Time Money List. He has played all over the world and has cashes dating back to 2008. He finished 3rd in the 2018 SHR Bowl and earned $2.1 million, making it his 2nd biggest live cash. Coming back to the partnership, Triton might likely have chosen Koon to represent the brand since he became a key player in two previous Triton series in Montenegro and Jeju. The player managed to reach the Final Table four times.

The upcoming 2019 Triton SHR Series will feature the biggest buy-in event ever hosted and is scheduled between 2 – 9 March. The series will see a packed field of high-stakes pros from around the world playing against each other for cash prizes never to be seen before. Keep reading GutshotMagazine.com for the complete coverage of this series as well as for your daily dose of poker news from around the world.