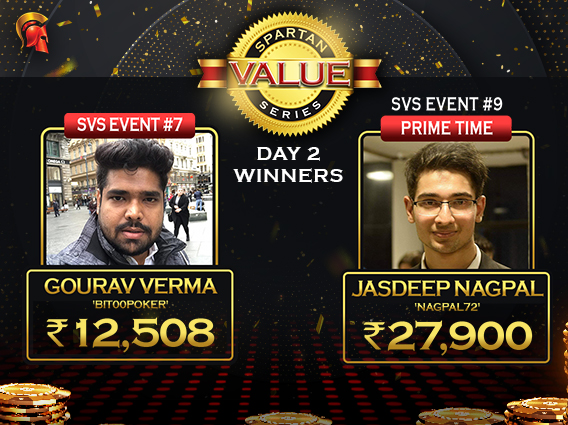 
The Spartan Value Series (SVS) is running its inaugural edition on Spartan Poker and yesterday was Day 2 of the series which will run between 18-25 August 2019. A total of 5 tournaments were hosted yesterday and these tournaments were all with lower buy-ins as the purpose of the series is to strengthen the bankroll of low-stakes tournament players. Keep reading for a complete summary of SVS Day 2…

The buy-ins won’t get lower than this as each entry only had to put up INR 55 to be a part of this event. 615 entries participated in the tournament and eventually, the prize pool was taken up to INR 30,750 and shared among the top 20 players with a min-cash of INR 412. Coming out on top of the field and making a bankroll addition of INR 7,380 for first place was ‘nanivjy’ and he managed to take down the title after beating ‘Indianavatar’ in heads-up, who earned INR 5,012 as runner-up cash prize.

INR 220 was the buy-in to the second tournament of the day and here, a field of 269 entries registered which was just enough to break the guarantee, creating a new prize pool of INR 53,800. The top 23 positions were paid out with a min-cash of INR 624 but Gourav Verma had his eyes set for the prize and nothing less. He outlasted the field to earn an SVS title and INR 12,508 in prize money after he beat ‘Aikido’ in heads-up, the latter winning INR 8,473.

279 entries registered in the third tournament of the day, each paying the INR 165 buy-in and taking the prize pool up to INR 41,850. Once again, the spoils were shared by the top 20 positions, each receiving a min-cash of INR 560. However, ‘Tequila05’ didn’t want any of these small prizes last evening, topping the field and emerging champion, earning INR 10,044 for his efforts. As for the runner-up position, it went to ‘DragonGlass’ who was paid out INR 6,821.

The prime-time slot meant a slightly higher buy-in of INR 440 and here, 279 entries joined the field, missing the guarantee just by a few more entries. From these, the top 23 players were to finish in the money and by the end of the tournament, it was ‘nagpal72‘ who was the last man standing. He earned INR 27,900 for this victory after beating ‘Aikido’ in heads-up. The latter earned his second runner-up title of the day on Spartan Poker and he’ll be looking to go one step further today on Day 3.

The final tournament of the day was Hi-Fi which happens to be the most popular daily tournament on Spartan. The guarantee was expected to be passed and once again, it attracted a decent field of 473 entries which inflated the prize pool to INR 4,73,000 which was later in the night shared among the top 40 places with a min-cash of INR 2,601. It was a good end to the night for ‘blindgame’ who ended up shipping the tournament and adding INR 89,870 to his poker bankroll. In heads-up, he beat ‘BenDingBuLLets’ who won INR 65,037 for his runner-up finish!