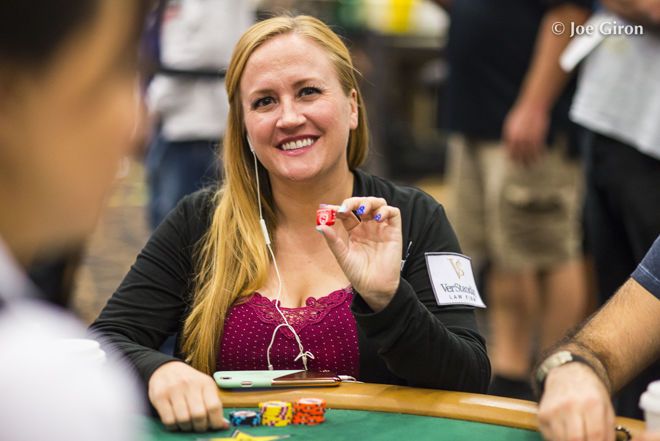 Jamie Kerstetter goes vegan for a year for $10k


The poker community has always been vibrant and happening. Betting enthusiasts come up with some novel, out-of-the-blue ideas for prop bets and that’s what has happened recently. Well-known female poker pro Jamie Kerstetter has decided to go vegan for a year. She announced her decision on twitter yesterday. Here’s the tweet. 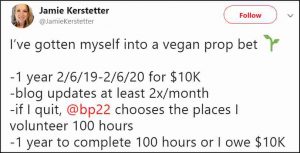 The idea of going vegan was initially put forth by a tweet by David Tuchman, when he made a post on Twitter and tagged poker legends Daniel Negreanu, Liv Boeree, Darryll Fish, Doug Polk and Bill Perkins.

Tuchman’s tweet received several replies, all with unreasonable amounts, but Kerstetter replied to his tweet saying, “Probably $10k – interested in doing it anyway and it would cover the more expensive grocery bills,” and the prop bet had been dealt, courtesy of Perkins. Negreanu, who is known for maintaining a healthy lifestyle, himself being vegan, replied to Kerstetter’s reply saying, “Let me know if you ever need any help or advice.”

Bill Perkins, the guy who bet $10k for Kerstetter to go vegan, had also previously posted a prop bet for weight loss and the brothers and poker pros Staples, Jaime (who recently left PokerStars) and Matt, both signed up for it and subsequently lost a lot of weight and earned the $150k from Perkins.

Kerstetter talked about Perkins, “Bill [Perkins] rules because he wants to encourage people to do the things they feel they should be doing anyway to have a positive impact on the world. It’s cool that he’s willing to make this bet to hold me accountable and I’m sure he’ll pick some really interesting places for me to volunteer 100 hours if I fail.”

A deadly prop bet which involved keeping yourself locked in a dark bathroom for 30 days was struck between Australia’s Rory Young and American pro Rich Alati. Alati was promised $100k by Young but after his premature termination of the bet at 20 days, he earned $62k as part of the deal.

Things like these happen all over the poker community and it’s a good thing sometimes since it encourages people to be a better version of themselves, like Kerstetter and the Staples brothers earlier. Keep reading GutshotMagazine.com for more such uplifting community news as well as general poker news from around the world.