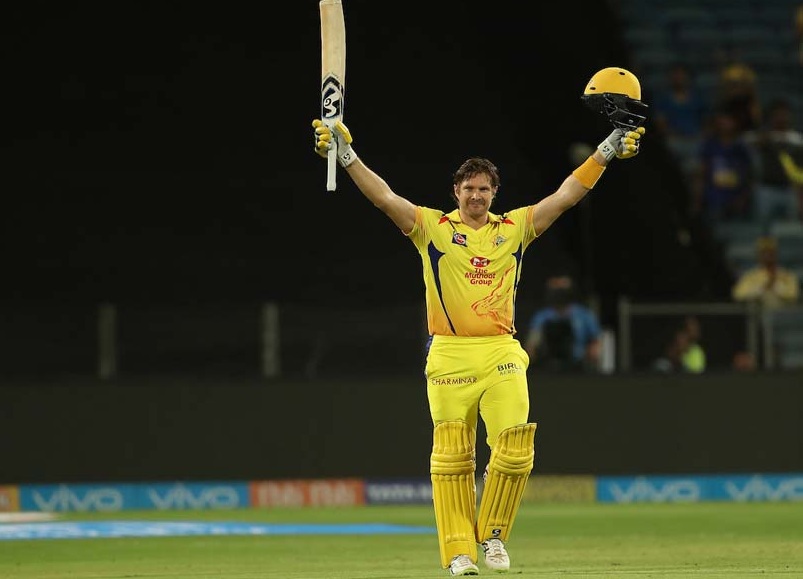 
The first 12 days of IPL 2018 saw a few batsmen reaching their nineties, but none went on to score a century. The next two days saw two centuries, one by Chris Gayle a couple of nights back, and now by Shane Watson in Chennai Super King’s match against Rajasthan Royals last night.

Chennai were playing at their new home ground (MCA Stadium, Pune) and they were put in to bat after Rajasthan won the toss. The last few days have seen quite a few high scoring games and yesterday’s match was no different as Shane Watson came out and went after all the RR bowlers.

Ambati Rayudu, Suresh Raina and Dwayne Bravo all played little cameos, but none could match the strike rate at which Watson was batting. He was dismissed by Ben Laughlin on the penultimate ball of the innings, after having scored 106(57) and entertained the Pune crowd. His innings saw 9 fours and 6 sixes, and many would wonder why the 36-year old retired from international cricket, seeing how well he timed the ball last night. CSK ended with 204/5.

It was a timid reply from the Rajasthan Royals batsmen. D’Arcy Short was finally dropped for Heinrich Klaasen but he didn’t do much either, scoring 7. Ajinkya Rahane is the usual anchor of the RR innings but he fell for 16, after which there was a fall of wickets at very regular intervals.

Ben Stokes was the last hope for the Royals and he was also the only batsman who looked slightly comfortable against the CSK bowlers. Once he was dismissed for 45, it was just a matter of time before the team was bowled out. Rajasthan ultimately lost by 64 runs, with six of the Chennai bowlers getting among the wickets. Man of the Match: Shane Watson.

CSK now got back to winning ways after losing to Punjab in their last game. If you miss the live cricket matches this weekend, head over to GutshotMagazine.com where we bring to you all the latest cricket news and IPL match results!