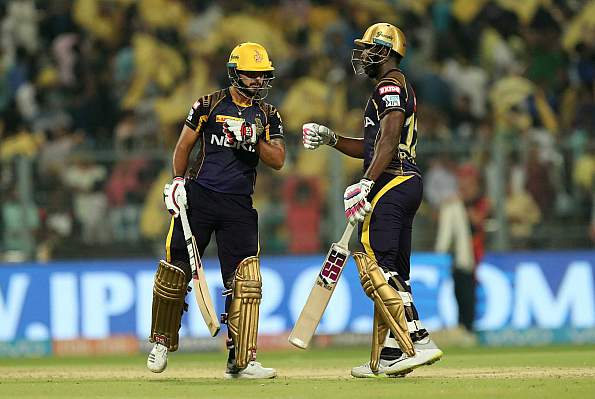 
After quite a few nail-biting finishes, we finally witnessed a one-sided contest in the 2018 edition of the Indian Premier League. Also, the trend of chasing teams winning in IPL 2018 also seems to be changing as all the last three matches have been high scoring ones, won by the team batting first!

Yesterday, Gautam Gambhir won the toss and elected to field first for the Delhi Daredevils. It was an important game for him, coming back to the Eden Gardens, where he played for Kolkata Knight Riders for the last 7 years and even led them to 2 IPL titles. There was a lot at stake for him, personally.

There were a couple of thirties from Uthappa and Lynn, but KKR were in a bit of a pickle when they fell to 117/4 with 6 overs to play. However, there was carnage thereafter with Andre Russell smashing 6 sixes in an innings of 41(12), including another 100+ meter six. Nitish Rana added to the damage, scoring 59(35) and propelling KKR to a massive score of 200/9 in their 20 overs!

The chase was going to be a tough one for DD but their last win was a chase of nearly 200 so they would’ve been hopeful. However, their scorecard looked like a telephone number, with no one except Rishabh Pant & Glenn Maxwell getting into double figures. They were reduced to 24/3 early on, these two scored forties and there was hope for Delhi until a collapse began again.

The required run rate was well in control when the ‘Maxi-Pant’ show was going on, and even for a while after they were dismissed. However, bad application by the rest of the DD batsmen meant they were bowled out for 129 in 14.2 overs, and KKR registered a massive 71-run victory. The spinners Sunil Narine and Kuldeep Yadav picked up 3 wickets each. Man of the Match: Nitish Rana!

If you miss the live cricket match today, you don’t need to worry. We at GutshotMagazine.com bring you all the latest cricket news and IPL match results. So, stay tuned!