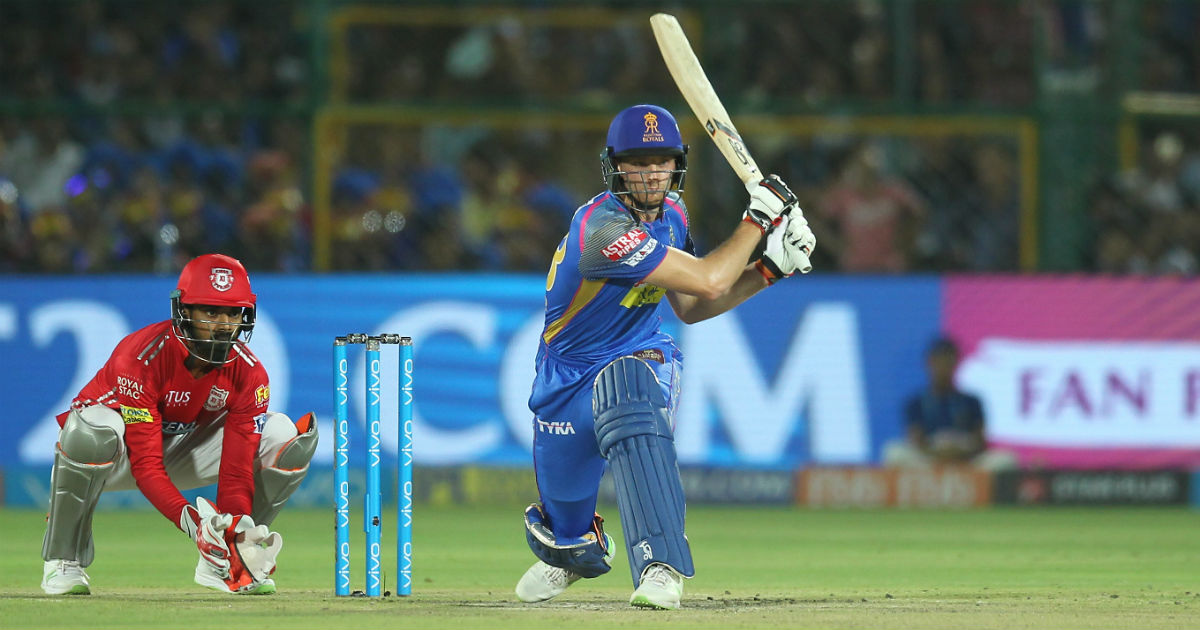 
Not very often will you find a situation like this, where all teams in the Indian Premier League have played 10 games each and you know exactly where each team stands now. Bottom of the table Rajasthan Royals played Kings XI Punjab last night, and while Punjab kept their place, Rajasthan gained a couple of spots.

With RR registering three losses in a row, everyone had their money on KXIP coming into last night’s game, especially since these two played just a couple of nights back and the latter won. Yesterday, Rajasthan won the toss and made the brave decision of batting first.

Jos Buttler’s promotion to the top of the order proved to be a brilliant tactic by the Royals, as he has now scored three consecutive fifties, after a very poor start to the tournament. His 82(58) last night set the foundation for his team, even as the other batsmen couldn’t contribute much.

Andrew Tye’s three wickets in the final over restricted Rajasthan to 158/8, and he ended with figures of 4/34. It was a par score and Punjab would’ve been confident at the innings break, but they were in for a huge surprise. Apart from KL Rahul at the top and Marcus Stoinis down at #8, none were able to get into double figures. Check out this scorecard that looks like a telephone number: 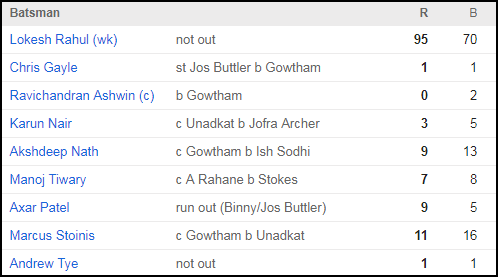 Krishnappa Gowtham struck early on, getting the big fish Chris Gayle out stumped. Then followed a string of horrible decisions by captain Ravi Ashwin, which included sending himself as a pinch hitter at number 3. He was bowled for nought off his second ball and the wickets kept tumbling as Punjab fell to 81/6.

The worst of all their decisions of the night was sending Marcus Stoinis out to bat at number 8, behind Ashwin, Karun Nair, Axar Patel & Akshdeep Nath. When he stepped out to bat, the required run rate had already crept up and this wasn’t a pitch where you could just come out and start playing your shots.

KL Rahul kept finding the boundary, even though he knew that the 32 needed in the last 5 balls was not going to be achieved. He registered his highest IPL score of 95(70)* as Punjab eventually lost by 15 runs. Man of the Match: Jos Buttler.