IPC Magazine Photo Booth For All 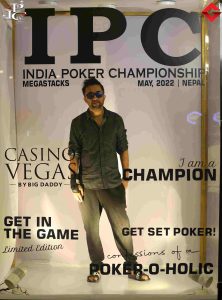 India Poker Championship (IPC) is known for bringing grandeur and innovation. This time around, along with introducing the Megastacks edition, the series also has an array of fun things to look out for. To grab more eyeballs and also give players the feeling of being featured on a magazine cover, IPC has set up a magazine cover glass cubicle. This is designed like the cover of a magazine, so you can stand behind and get a picture clicked.

Siddhanth Kapoor and several other poker players have already clicked pictures in the booth, when do you plan to?