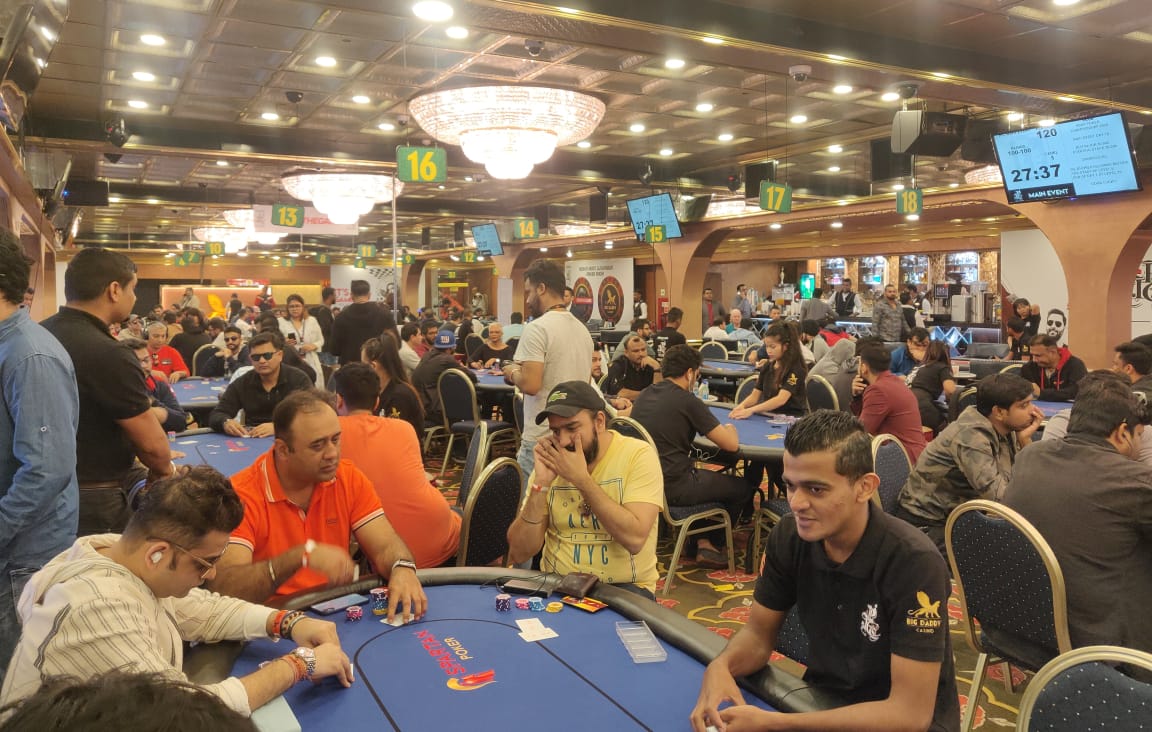 
5:30am: Rubin Labroo rides his FT chip lead to go on to win the 50k Main Event and you can read all about it here.

1:10am: Proceedings are going really slow and the latest elimination was that of Russian player Alexander Moiseev who was the only non-Indian player on the Final Table. INR 8,23,100 was his prize and that’s a pretty decent payout. From here, 7 players remain and all of tehm are guaranteed a 7-figure payout tonight.

Earlier in the day, we caught up with Zarvan Tumboli who had a brilliant series thanks mostly to a runner-up finish in the 100k Highroller, where he earned INR 31 Lakh due to a 3-way deal on the final table. See what he had to say:

20th Jan, 12:25am: Abhishek Katiyar began the final table as the second shortest stack and it wasn’t too long before he busted as well, ending a great run in 9th place for a payout of INR 6,18,100. His AK ran into Mubeen Saudagar’s pocket Queens, the latter needing the chip up as he began the FT as the shortest stacked.

10:45pm: With Ujjwal Narwal heading out of the tournament in 10th place, we’re all set with the final table of the prestigious IPC 50k Main Event. Narwal also earned INR 5,12,600 for bubbling the final table and from here, there are going to be some serious pay jumps which none of the players will want to miss.

Here’s an image of the ‘Last Lady Standing’ in the 50k Main Event, who also won this award once on the Sep 2019 IPC series:

Goonjan Mall had a fantastic run this IPC so far, finishing 10th in the 100k Highroller and then 41st in the 50k Main Event. Watch him as he shares what it’s like to be a non-professional poker player:

8:30pm: We didn’t miss the chance to catch up with Sangeeth Mohan aka ‘SaMoh’:

8:05pm: 2019 Sep 10k Kickoff winner Siddharth Mundada is still in the mix, while Vikram Kumar and Madhav Gupta are some better known faces still in the running to become the India Poker Champion. Rubin Labroo, Akanksha Singh, Nathan Rao, Ujjwal Narwal, Jagdeep Singh, and Jasven Saigal are also fancying their chances while among the celebrities, Chetan Hansraj has also made the final 30 players in the 50k IPC Main Event.

3:45pm: Players have departed on a 10-min break with about 72 players still in the 50k Main Event. Here’s a look at recent eliminations:

3:00pm: The bubble has burst and the unfortunate player to walk away without any prize is Sambhav Raj, who heads out in 87th place. On other tables, WSOP bracelet winner Abhinav Iyer has been busted while overnight Day 1B chip leader Joey Saha has also exited the tournament.

1:00pm: Welcome to Day 2 of the coverage of the IPC 50k Main Event where a total of 130 players have found their seats and we expect the money to be reached soon, with 86 players being paid out a min-cash of around 82k. Play begins at Level 17 with the blinds at 3,000/5,000 and a BB ante of 5,000. Remember, the winner tonight is not just an IPC Main Event winner but also the new India Poker Champion!

1:00am: 90 players still in Day 1B of the Main Event. Remember, 74 qualified from Day 1A yesterday. Minissha Lamba and Ranjeet Negi just got busted, with 99 and 77 against Sreekanth Narayan’s JJ.

We also spotted Neha Dhupia on the tables a while back, and there are currently around 135 players left in the field:

19th Jan, 12:20am: Minissha Lamba, Siddhanth Kapoor, and Ali Gony, were the celebs we saw in the field but Siddhant just walked away and this series is over for him! When we last checked, these were some of the top chip counts across the room:

11:55pm: Players took a small break and there was a crowd gathered to wish Minissha Lamba for her birthday and cut a cake while they were at it too. Happy birthday Minissha Lamba!

10:55pm: The country awaits the new India Poker Champion! INR 3,36,10,600 is the final generated prize pool which came from 693 entries (Day 1A – 360 and Day 1B – 333). From this field, the top 86 players will be paid out and they will all receive a min-cash of INR 82,700. Remember, this edition’s Main Event winner will also become the India Poker Champion which includes an INR 20L sponsorship package from Spartan Poker, a luxurious Panerai MS Dhoni Limited Edition watch worth IRN 6.67L and the prestigious trophy!

9:50pm: It’s the end of the registration period and the final count is 333 entries for Day 1B which takes the total field up to 693 entries in the IPC 50k Main Event at Goa’s Big Daddy Casino. Once again, IPC has gone on to break records, this being one of the largest fields in Asia with the same buy-in. History created!

9:15pm: In the meantime, we caught up with popular Bollywood and television actress Anita Hassanandani Reddy who bagged 120k chips in Day 1A, but she mentioned how she’s also going to try and end with a bigger stack on Day 1B today. See what she had to say:

8:55pm: 310 entries on the screen which takes the total count to 670 entries. Ladies and gentlemen, the INR 3.25 Crore guarantee has been passed! We see Raman Gujral getting busted on one of the tables. For the 5th time in this 50k Main Event…

8:35pm: Ashish Munot has hit the rail again. However, he’s one of the best in the circuit and he knows the prizes that will be up for grabs in this tournament, so he’s going to re-enter and fire his third bullet in all likeliness. Remember, it was only 2-3 months back that Munot went on to ship the WPT India Main Event in Goa.

7:45pm: Arsh Grover, Mayank Agarwal, Kanav Parwal, Raman Gujral were some of the many to bust in the last hour or so of play. Ankur Dewani and Ashish Munot also busted but immediately walked over to the registration desk to re-enter.

6:25pm: At the break, Rohit Mishra was the biggest stack with around 52k in chips. 240 entries and still counting. Remember, it’s an INR 3.25 Crore guaranteed prize pool tournament and by the looks of it, the guarantee should easily be met. At one of the tables, Rajeev Kanjani was busted but he re-entered immediately.

5:20pm: 188 entries on the screen. After missing the series so far, Adda52 Celebrity Pro Minissha Lamba has walked in to play Day 1B of the Main Event.

5:10pm: Lakshpal SIngh, Nadeem Basha, Jayjit Ray, Gokul Raj and a whole group walked in to register a coupel of minutes back.

4:55pm: Sajal Gupta, Zarvan Tumboli, Madhav Gupta and Ayush Garg also spotted on the tables as the count goes up to 148 entries. The overall field has gone to 500+ now! Zarvan come back fresh off a runner-up finish in last night’s 100k Highroller which you can read all about here.

4:45pm: Shruti Sinha and Aditi Bhatia walked in to register themselves to the 50k Main Event, along with Abhishek Jalan.

4:30pm: It’s Day 2 1B of the 50k IPC Main Event and the seats are slowly filling up. Just to refresh your memories, we had 360 entries yesterday and from them, 74 survivors bagged chips and will return for Day 2 tomorrow. Day 1B has begun a while back and we have another 90 entries registered so far and some of the many faces we saw on the floor included Siddhanth Kapoor, bracelet winner Aditya Sushant, Anant Purohit, Rubin Labroo, Kavish Kukreja, Joey Saha, and quite a few more… Most of them played Day 1A and are returning for a second crack and the Main Event today.

3:30am: 74 survivors got a bg to Day 2 and from them, ALok Birewar has the largest stack. Read all details here.

18th Jan, 12:45am: Avneesh Munjal, Vivek SIngh and Lakshpal SIngh were some of the bustouts we managed to catch.

11:05pm: Defending champion Raj Talwar is in the mix. In fact, he just tripled up facing off against Mayank Lakhani and Wilson Yomso, taking his stack up to 147k thanks to a diamond flush he hit on the turn.

10:15pm: WSOP bracelet winner Abinav Iyer got busted on one of the tables.

9:55pm: We see Anita Hassanandani walking out of the poker room. Seems like she’s been busted but there’s still the chance to re-enter.

9:20pm: There’s barely any place here at the Big Daddy poker room in Goa and the count right now is at 315 entries.

8:25pm: It’s the long dinner break and some entertainment is happening in the middle of the tournament floor as players take a break. 290 entries on the day so far and when players return fom the break we begin with Level 5 with the blinds at 200-300-200.

8:15pm: A few eliminations from around the room include Rohit Mishra, Sarala Ramakrishnan, Sandeep Singh and more. However, they all have the option of re-entering into the tournament, either today on Day 1A or tomorrow on Day 1B of the 50k Main Event.

7:35pm: 240 entries on the screen and people are still entering the poker room on board the Big Daddy Casino in Goa. Remember, it’s Day 1A of the 50k Main Event and the tournament boasts as INR 3.25 Crore guarantee. Just before the tournament kicked off, we caught up with Vaibhav Temani, online player who is playing his first-ever live tournament. See here:

6:00pm: Shuffle up and deal says the tournament director and the clock shows 101 entries at the start of the tournament. Registration will be open till before the start of Level 9 and play will go on till Level 16 before we bag up and resume tomorrow. It’s going to be a fun next few hours and you can get all updates of the same on this page…

5:45pm: We’ve crossed 50 entries and we’re just around 15 minutes away from the dealers shuffling up and dealing. This is the biggest tournament of the series and we begin with Day 1A of the 50k Main Event today at 6pm, with heavy pressure on the tournament to do well after the huge field of 777 entries that registered to the 35k Main Event in September 2019. As we prepare this post, we can see a number of celebrities walking in like Rannvijay Singh, Dino Morea, Shruti Sinha, Basheer Ali and many others. Remember, the winner of this tournament will also be crowned the India Poker Champion of the 2019/20 season!!

The tables are slowly filling up and it’s going to be one packed house today as the 100k Highroller is also taking place simultaneously. The money bubble burst a while back with 24 places being paid, and we’re currently down to 21 players, with huge pay jumps approaching soon. See bubble update here: