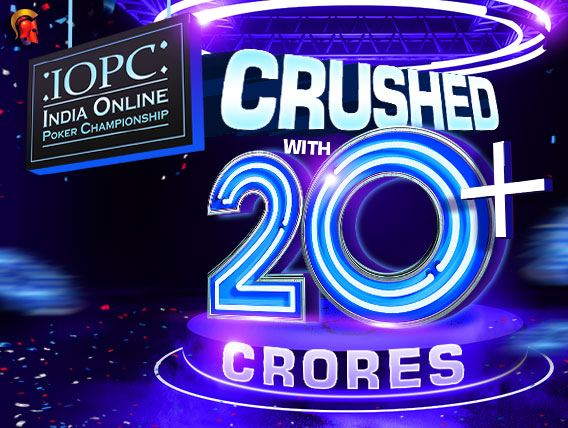 
The India Online Poker Championship (IOPC) had humble beginnings way back in October 2015 when Spartan Poker launched its first edition, guaranteeing INR 8.6 Lakh ($12,568) in prize money. While this may sound like a small amount today, it was a massive prize pool back then, and the bi-annual online poker festival has only showed a steep upward trend with every edition since then.

It was Jan 2017 when the series prize money hit 8-figures, guaranteeing INR 1.35 Crore ($197,269) across 37 varying tournaments. The latest edition just ended last night and this one had a humongous series guarantee of INR 16+ Crore ($2.24 million) and these numbers tell you how much the IOPC brand has grown over the years.

With each edition, the number of tournaments keep increasing along with the guarantees, giving every player in India a chance to win potentially life-changing amounts on Spartan Poker. A total of 99 tournaments were held between 24 Jan – 9 Feb including a record-breaking INR 3 Crore GTD IOPC Millionaire Main Event, the biggest single tournament in India till date, which was taken down by Anurag Srivastava aka ‘Norman Bates’.

By the end of the series, the numbers were calculated, and it turned out to be a gigantic sum of INR 20,50,49,900 ($2.87 million) that was given away to the hundreds of winners through the series. That’s 23% more than what was promised for this edition. It’s been a great success story for IOPC, with this amount of INR 20.5 Crore being around 23500% more than the advertised amount from the first ever IOPC nearly 5 years ago!

“It was just a surreal moment at 5:15 today morning. I will probably take some time just to digest it. I owe all my success to my coaches in IPP,” said the winner after becoming India’s biggest ever online poker winner from a single tournament. He beat a field of 3,490 entries and bagged INR 59+ Lakh as the top prize for beating this field that included Wilson Yomso aka ‘PokerBadger’ in heads-up. He bagged this prestigious IOPC title and is surely going to go down in IOPC history.

Having beaten another very known pro ‘Zenos’ in heads-up of the tournament and taking home a massive cash prize, Pentakota was clearly thrilled with this victory. When we reached out to him, he said, “It was a great tournament and heads-up in particular was deep and really tough. Moreover, it was fun to play with one of top regs in India.” For those who don’t know, Pentakota also won the first ever Spartan Millionaire in September 2016, so he’s not new to winning these high-value online tournaments at all.

“This was my biggest tournament cash till now. I’ve had deep runs and a few wins as well earlier, but this became my biggest score till date. More than the money, the win gives me the confidence that I can play in high rollers in the future and try to produce similar results,” said Kothari after striking a 5-way deal with Abhineet Jain, Arsh Grover, Nikita Luther and Anant Purohit. These players are all fairly known in the circuit and none of them wanted to mess around with the massive pay jumps that were on offer.

He was right about his confidence to play being boosted as Kothari took down another IOPC major a few days later after a 3-way deal. He said, “The SHR win was even more special as the player pool was small but very tough. It also validated the fact that the legends win was not a total fluke. Thus, it was even more special.” Primarily a cash games player, Kothari is now showing he has what it takes in the tournament scene as well. Earlier, he’s won plenty of cash game promotions on Spartan Poker and once even walked away with a brand new Mercedes!

“Feels great to have shipped the PLO HR after FT’ing it thrice already. It’s one on my favourite formats of the game and hope to see a lot more PLO tournaments in the lobbies,” said an enthusiastic Gaurav Sood who is a regular on Spartan Poker and was clearly happy to have won in his preferred format of poker. Sood is an upcoming player who has been winning plenty of titles and building his bankroll, also having travelled for live poker a couple of times in the past few months.

Apart from these single tournaments, Spartan Poker also hosts an IOPC Leaderboard which allows players to prove their consistency over the course of the series and be rewarded for it accordingly. A total of INR 30+ Lakh was kept aside for the top 10 in the Leaderboard race, including a stunning new ride in an MG Hector for the winner.

In the July 2019 edition of the IOPC Leaderboard, Amit Sur aka ‘Immortal killerr’ finished second and this time too, he had a fantastic series, proving that he’s among the best online poker players in India. Here, he had 57 cashes and 2 titles throughout the series, driving home in a new MG Hector for this performance! Read more here.

This was the most awaited series for online poker players across the country and it certainly lived up to expectations. Another record-breaking series has come to an end and you can keep reading GutshotMagazine.com for updates on when the next IOPC series will be hosted!