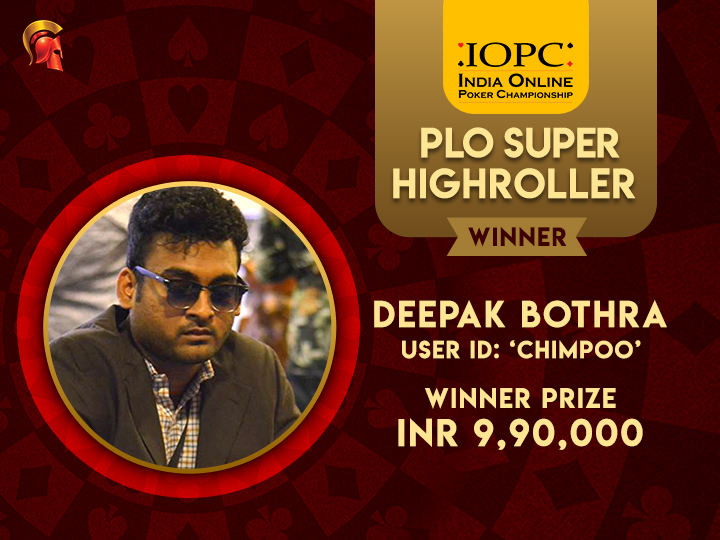 
The second last day of India Online Poker Championship (IOPC) saw Deepak ‘chimpoo’ Bothra emerging as Pot-Limit Omaha Super HighRoller winner. Bothra who was rewarded with a prize of INR 9,90,000 outlasting 54 entries in total. Only one day left to claim the beautiful Jeep Compass from TheSpartanPoker, IOPX Day 10 will have the biggest guarantee tournament of INR 1.5 CR Main Event at 4:30 pm with a buy-in of INR 11,000.

The new format DareDevil tournament has seen tremendous response from the players, where this tournament gives a player to re-buy with half buy-in i.e INR 2,200 for the same starting stack until the late registration period. Last night the tournament saw 410 entries (unique entries: 183; re-buys: 227) which made a prizepool of INR 11,86,000. The massive prize pool was distributed amongst top 25 places with a min-cash of INR 7,116.

The eventual winner was none other than Eka Vedantham who plays under the moniker ‘gettingthere’ claimed the title for INR 314,290. Vedantham eliminated ‘Strangeplay’ at a second place who collected INR 192,725.

The very first-time TheSpartanPoker.com introduced Pot-Limit Omaha event in the IOPC schedule also making it to a Super HighRoller tournament with 30L GTD (RE). As mentioned in the intro, it was Deepak ‘chimpoo’ Bothra to take down the title outlasting 54 entries in total. Bothra collected INR 9,90,000 on the win while the second-place finisher ‘Anand’ took home INR 780,000 for the impressive finish.

This was all about IOPC Day 9, take a quick look at the leaderboard: 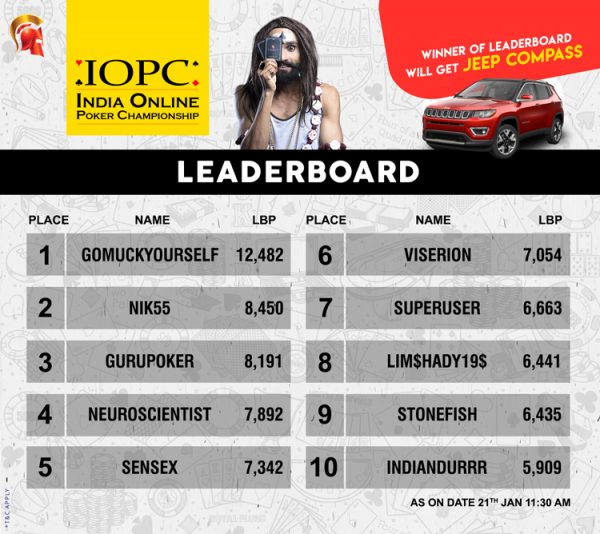