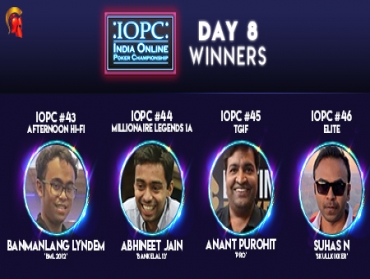 
The India Online Poker Championship (IOPC) is the biggest online poker series in India and the bi-annual series held on Spartan Poker is here once again, with INR 16+ Crore in guarantees between 24 Jan-9 Feb 2020. Yesterday was IOPC Day 8 and the biggest talking point was the Millionaire Legends tournament, which began with its first starting flight Day 1A last night. Take a look at our complete summary of IOPC Day 8…

The day usually starts small on Spartan Poker and that’s exactly what happened here too, with a buy-in of INR 550 which attracted 696 entries. 47 of them were guaranteed a payout of a minimum of INR 1,983 each and by the end of the tournament, it was Ravi Jain aka ‘Rvjn91’ who managed to claim an IOPC title for his trophy cabinet, adding a decent amount to his poker bankroll as well. In heads-up, he was ahead in chips against ‘bhkh100’ and the two eventually decided to cut a deal to end proceedings.

The second tournament had a buy-in of INR 1,100 and here, 495 entries joined to beat the guarantee once again, creating a prize pool of INR 4,95,000. So far, all but one IOPC tournaments have had broken guarantees and the trend seems to continue. 31 players received a min-cash of INR 4,356 each but Banmanlang Lyndem aka ‘bml2012’ didn’t stop for anything below the top prize, beating Vivek Karwa aka ‘acchemicals’ in heads-up with an Ace-high flush over 2 pairs QQ77. Karwa narrowly missed his second IOPC title of the series!

There was plenty excitement in the air because this is the most expensive Millionaire with a massive buy-in of INR 27,500. It means you are only going to have the best pros in this field and Day 1A saw the most impressive turnout with 369 entries registering and adding a massive INR 92,25,000 to the Millionaire Legends prize pool. Progressing from this field was a total of 62 stacks and at the top of all of them is none other than Abhineet Jain aka ‘bankelal13’ who went through with a bag of 615,352 chips, way ahead of the rest. Closest to him in chips is Sahil Chutani aka ‘$lim$hady19’ who went through to Day 2 with 474k chips.

Thank God it’s Friday is a popular weekly tournament on Spartan Poker. Known by his screen name ‘Pro’, Anant Purohit is a frequent winner on this platform and once again, he grabbed an IOPC title on Spartan, shipping TGIF after beating the massive field of 1,034 entries that each paid INR 1,650, passing the guarantee and taking the prize pool up to INR 15.51 Lakh. It ended with a heads-up deal with ‘KIM28’. Others in the top places included Naren Purohit (3rd), Vinay Choudhry (7th), Naresh Veeravalli (8th), Madhav Gupta (12th), Lakshpal Singh (14th), Tathagata Sengupta (17th), Ratul Steves (20th), Ayush Garg (23rd), Sumit Sapra (36th), and many others.

With the buy-in priced at INR 11,000, not everyone can afford to register to Elite on Spartan but only the best ones. Yesterday, the winner was one we haven’t seen before in Suhas N aka ‘Skullkiker’ who swam through this field of 526 entries to win his biggest ever online score yet. Talking about the tournament, it smashed the guarantee and INR 52.6 Lakh was the new prize pool, divided among the top 47 places with a min-cash of INR 29,982 each. Suhas was up against Apratim Sharma aka ‘checm@te’, Neel Joshi aka ‘Worm33′ and mumbaifish’ in 4-handed play when they decided to strike a deal, Suhas being way ahead than the rest. Gutshot caught up with him after this win and he said, “This is my first IOPC title and guess what? It was from a satty ticket. I enjoyed playing the whole tournament and it gives me great satisfaction to have shipped the tournament.”

Last event of the night is always the Daily Hi-Fi and no prizes for guessing that the guarantee was broken again, with 494 entries all paying INR 3,300 to generate a prize pool of INR 14.82 Lakh. INR 8,151 was the minimum payout and it went to the final 45 players of the night, but the player to maximize his profits from this tournament was ‘illuminati.AM’ who beat ‘lol this guy’ in heads-up, both winning decent prizes to end the night on Spartan Poker.

For more updates from the India Online Poker Championship and other tournaments taking place in India and around the world, stay tuned to GutshotMagazine.com.