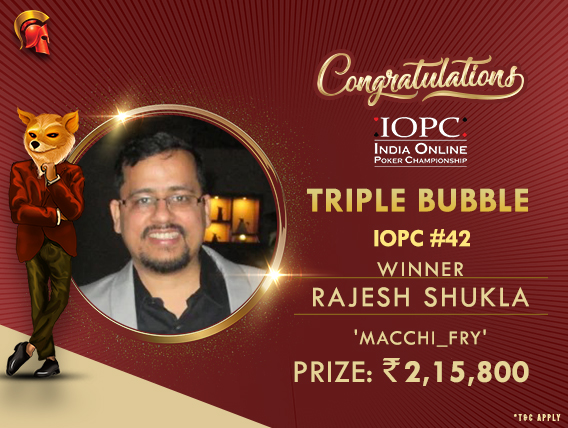 
IOPC Day 8 saw 6 events played out, the biggest one being the Elite which saw Kanishka Samant bag the huge 1st place cash prize of INR 12,74,534. One of The Spartan Poker’s innovative tournaments, IOPC #42 – Triple Bubble INR 12 Lakhs GTD, was also part of the line up.

The unique aspect of this is that the bubble boy gets his buy-in back, the Final Table bubble player is awarded with a ticket to The Millionaire and the 2nd place finisher gets a free entry to Millionaire and Two of a Kind (2.o.K). Yesterday’s Triple Bubble followed suit of almost all previous IOPC crushing the guarantee, with the event attracting 614 total entries, including 100 re-entries and 223 re-buys.

All five of them were very good players and agreed on a deal shortly after the top 5 was reached. Runner-up Garg has earned the Triple Bubble special gift of Millionaire and 2.o.K tickets. The FT bubble boy winning the Millionaire ticket was ‘Chairman’ and the money bubble boy came to be ‘DonW’, who will see his buy-in refunded.

Coming to the champion, Shukla has completed so many great achievements in the last year and was even awarded by Spartan at the recently held IPC Awards ceremony in Mumbai as the Player of the Series for October 2018. His latest win includes topping the SSS Leaderboard for the second time. He also took down the Cool Leaderboard in November last year, which shows how consistent he is in finishing high.

We got in touch with the champion after his win and he commented by saying, “I enjoyed the Triple Bubble throughout and IOPC series so far, which had plenty of super value games. I ran deep in many events but could not close it. This was very crucial win for me as it has brought me in the IOPC Leaderboard. I’m looking forward to grinding for next two days and take down the Leaderboard. It’s going to be super fun.”

Poker pros like Shukla need no bankroll addition to play more poker, but every penny made while playing this game helps them achieve great feats in future, which is what he’ll be hoping to do with an extra hyped 2019.

Keep reading GutshotMagazine.com for more IOPC results, roundups and general poker news from around the world.