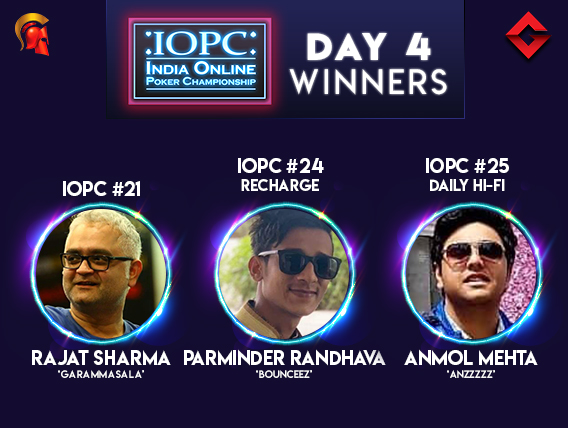 
We have progressed to Day 4 of the India Online Poker Championship (IOPC) and so far, the guarantees of 25 tournaments have been smashed! Hosted on Spartan Poker, IOPC is one of the major poker series in the country and is now reaching heights! The biggest winner of the day was Parminder Randhava to triumph the Monday feature. While other winners were also crowned, here is a complete summary of IOPC Day 4…

The day began with circuit grinder Rajat Sharma outlasting a field of 786 entries. The buy-in to the first tournament was as low as INR 550 which surpassed the promised amount to INR 3.93 Lakhs in the prize pool and the top 55 finishers took home a slice from the same, a min-cash of INR 1,925. Sharma playing under the username ‘Garammasala’ railed out ‘Thor009’ to the runner-up position after the latter couldn’t stand Sharma’s higher two pair of Aces and Twos and eventually captured the winner’s prize money.

The buy-in shoots up to become INR 1,100 registering a total of 497 hopefuls in the second tournament of the day. Once again, the top 39 finishers earned INR 3,429 as min-cash, a portion from the prize pool of INR 4.97 Lakhs. Conquering the field was ‘bob_marley’ who wished to stay anonymous securing the IOPC title after sending ‘CARDashian66’ in the second position with a heads-up deal.

It took 662 players to crush the third tournament of the day with each one paying a buy-in of INR 880. Eventually gathering a bigger prize pool of INR 5.29 Lakhs, a portion of which was witnessed by the top 47 players who strolled out with the min-cash of INR 3,018. It was an anonymous player ‘thepokerbrat’ who captured the largest portion of the same and pushing away online crusher Tathagata Sengupta aka ‘RadioActivity’ to the runner-up position after the players struck a 4-way deal.

Parminder Randhava aka ‘Bounceez’ outlasted a massive field of 1,010 entries to grab the Monday feature ReCharge INR 14 Lakhs GTD title. Randhava defeated the 2020 India Poker Championship Rubin Labroo aka ‘kornkid’ in heads-up. In level 54 of the tournament, Randhava with 6.6 million chips holding Ks Kd up against Labroo with 5.47 million holding Js Ac. Pre-flop, Labroo put his entire stack in the middle and former called. Randhava rivered a full house when the board ran Kh 9s Jc 7s 7d and Labroo had to back out with his pairs of Jacks and Sevens.

Gutshot caught up with the champion who said, “I was playing safely throughout the tournament. But top 3 was fun as the other 2 had almost 4 times my stack. And I still managed to clear them in not more than 10 minutes.” To read more on the Monday feature, click here.

For a buy-in of INR 2,200, a total of 715 players grabbed their seats to the final event of the day. Daily Hi-Fi is a popular tournament, always attracting the maximum crowd. Once again, the tournament guarantee crushed to generate INR 14.30 Lakhs in prize pool which was shared among the top 54 places. Ultimately, the day ended with Anmol Mehta aka ‘Anzzzzz’ railing out Sagar Choudhury aka ‘Gal Gadot’ in level 51 when he couldn’t dominate Mehta’s single pair of tens with Ace kicker and settled in the runner-up position. Mehta secured a valuable title and added another feather to his poker cap. For more updates on the India Online Poker Championship and other tournaments from around the world, stay tuned to GutshotMagazine.com.