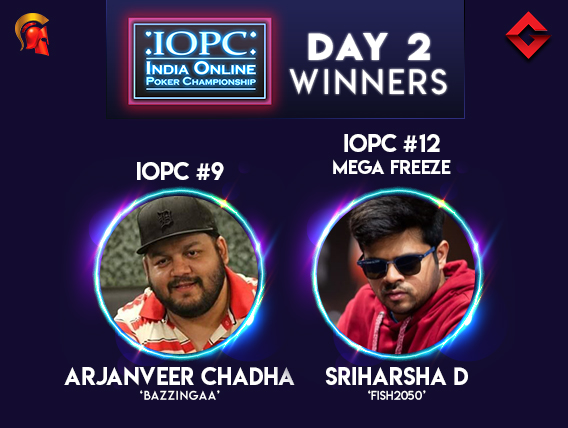 
Two days ago, Spartan Poker launched the 2020 edition of the India Online Poker Championship (IOPC) which is the country’s biggest online poker series. Yesterday was Day 2 of this edition where the highest guaranteed tournament was Saturday’s feature Mega Freeze INR 12 Lakhs GTD. Apart from that last night also concluded Day 1B of the enthralling January edition’s Millionaire X5. There were other winners too and here is a complete summary of IOPC Day 2…

As usual, the day began with a smaller tournament that had a buy-in of just INR 550. A field of 963 entries registered to the tournament to take the prize pool all the way up to INR 4.81 Lakh, which was eventually distributed among the top 71 players along with a min-cash of INR 1,829. The tournament halted in level 44 after a 4-way deal and with ‘GHOSTF@CE’ carrying the largest stack of 2 million was announced the official winner of the first tournament closely followed by Pavankiran B aka ‘B Pavankiran’ in the second position.

Once again, the guarantee was smashed in the second tournament of the day and the buy-in went higher up to INR 2,200 as 437 entries took to the tables creating a new prize pool of INR 8,74,000. A slice of which was shared among the top 30 players with a min-cash of INR 6,555. The eventual winner turned out to be online reg Arjanveer Chadha aka ‘bazzingaa’ who rode past the field defeating ‘Pravirsingh’ in heads-up with his higher two pairs of KK77.

The buy-in slightly decreased to INR 1,100 attracting 615 entries registered to create the prize pool up to INR 6.15 Lakh, crushing the promised guarantee! Only the top 47 players from this field were paid out with a min-cash of INR 3,505 and out of which ‘Amaterastu’ ended up being the most successful, shipping the event with his pair of 44 and Ace kicker knocking out Deepak Bothra aka ‘chimpoo’ in heads-up.

Attracting another set of 464 entries in Day 1B of the Millionaire X5 for a fixed buy-in of INR 8,800. These hopefuls are running to grab INR 15 Lakhs which is assured to the top 5 places! This day saw the eventual chip leader ‘bharat29’ bagging the enormous 2.45 million stack and is closely followed by Vikranth Varma aka ‘borntrouble’ accumulating 2.39 million.

Day 1C of the tournament will commence tomorrow, Sunday followed by Day 2 Main Event which will eventually crown the top 5!

Dominating a field of 254 entries with each one enrolling after paying INR 5,500 was Sriharsha D aka ‘Fish2050’ in the Saturday feature tournament Mega Freeze INR 10 Lakhs GTD. The entire tournament saw the prize pool INR 12.70 Lakhs, once again smashing the assured guaranteed amount which was well-distributed among the top 31 places along with a min-cash of INR 11,176. Sriharsha railed out Eka Vedantham aka ‘gettingthere’ in heads-up for his trip Kings while the latter failed to dominate with his two pairs of Kings and Tens.

This was the final tournament of IOPC Day 2 and is one of the most popular daily tournaments on Spartan Poker, the guarantee was passed once again making INR 14.28 Lakhs in the prize pool with 714 entries each paying INR 2,200. The star of the night was ‘Sukoonist’ who captured the first-place prize money after defeating Mega Freeze champ Sriharsha D aka ‘Fish2050’ in heads-up, going past him with his pair of Queens while Sriharsha only had Ace high to show.