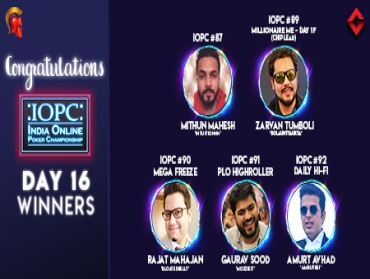 
We are just one day away from marking an end to the biggest online poker series in the country, the India Online Poker Championship (IOPC) INR 16+ Crore GTD. With the surroundings heating up, yesterday hosted 6 tournaments including The Millionaire Main Event INR 3 Crore GTD, wrapping up its sixth of eight flights. And here is a complete summary of IOPC Day 16…

INR 550 was the buy-in for the first tournament of the day which pulled out 574 entries driving past the guarantee to become INR 2.87 Lakhs in the prize pool and the top 39 places finished in the money along with a min-cash of INR 1,980. It was online reg Mithun Mahesh aka ‘Intuitionnn’ to seize the tournament after defeating ‘Baby_Poker’ with his two pairs of Kings and Twos over his opponent’s Sixes and Twos.

A field of 418 players enrolled in the second tournament of the day for INR 1,100 buy-in out of which 31 places received a min-cash of INR 3,678 from a bigger prize pool of INR 4.18 Lakhs. The competition ended in level 37 when ‘jackaal59’ outlasted ‘Piko’ with his two pairs of Queens and Eights over his opponent’s single pair of Eights, thus bagging the valuable IOPC title!

The sixth starting flight of the IOPC Millionaire Main Event garnered another set of 429 runners for INR 11,000 buy-in paid by each entry. Day 1F was topped by the well-known player Zarvan Tumboli aka ‘BolAuntyAuKya’ amassing the largest stack of 3.28 million. Tumboli is followed by ‘BuddyLove’ in the second position with 3 million chips, progressing with the survivors to Day 2.

Gaurav Sood aka ‘mozzie17’ conquered a field of 135 entries to take down PLO HighRoller. The buy-in to the event was INR 33,000 which was enough to crush the displayed amount to become INR 43.20 Lakhs in the prize pool. The top 15 places received a paycheck of min-cash INR 77,760 while Sood added 7-digits to his poker bankroll after eliminating ‘prchiee’ in heads-up.

In Level 40 of the tournament, Sood with 3♠ A♣ 7♣ 5♠ was up against ‘prchiee’ with K♦ T♣ J♦ K♥. The latter raised 208k and got a call from the former. Flop J♠ 8♠ 7♥ saw ‘prchiee’ putting his entire stack in the middle and once again a call from Sood. Turn 2♠ saw Sood hitting a J-high flush and knocking out his opponent in the second position, with the 2♣ river card being inconsequential.

Day 16 of the IOPC ended with Daily Hi-Fi being the last tournament and 360 runners entered the event after each one chipped in INR 3,300. Generating a final prize pool of INR 10.80 Lakhs, the top 30 players took home a min-cash for their efforts. Outlasting the field and claiming the first-place prize money was Amrut Avhad aka ‘amrut851’ bagging his first IOPC title after defeating ‘TamilSuperKing’ in the final hand with his pair of Deuces against his opponent’s high card Ace, thus ending the day!

For more updates on poker industry and other tournaments around the world, stay tuned to GutshotMagazine.com.