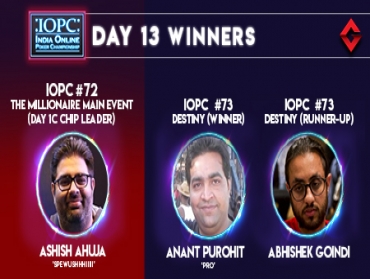 
Another day, another success at the India Online Poker Championship (IOPC). So far, thirteen days of fun-filled poker have taken place at Spartan Poker in this series. Yesterday concluded 5 more tournaments and the third starting flight of the spectacular Millionaire Main Event. Keep reading for a complete summary of IOPC Day 13…

INR 550 was the buy-in to enter the first tournament of the day. 609 contenders registered themselves out of which only 47 players would go on to min-cash INR 1,735. ‘yUDdam’ who wished to stay anonymous outlasted ‘varonir’ in heads-up to grab this IOPC title.

The heads-up play reached level 47, ‘yUDdam’ with 6♦ 6♣ up against ‘varonir’ with A♣ 5♥. The latter put his entire stack in the middle and got a call from the former. The board opened 6♠ 7♠ 7♦ K♦ K♠ and nothing could beat ‘yUDdam’ who scored a full house over his opponent’s two pair.

The buy-in to the second tournament jumped to become INR 1,100. And the guarantee was taken up to INR 4 Lakhs. Eventually, 461 players joined the field, the assured amount was surpassed, generating a fresh prize pool of INR 4.61 Lakhs and ‘pinnug1’ took away the largest chunk of the same. The tournament halted in level 37 when the players decided to settle for a 3-way deal with ‘pinnug1’ carrying the largest stack of 1.61 million. He was followed by ‘Chinmoku’ in the second position and ‘riverismine’ in third place.

India’s biggest online poker tournament, The Millionaire Main Event displays INR 3 Crore GTD and yesterday concluded Day 1C of its eight starting flights. Pulling out another set of 351 players for a buy-in of INR 11,000, the 2020 BPT Kick Off event champ Ashish Ahuja accumulated the largest stack of 2.45 million. Ahuja who plays on Spartan as ‘Spewushhhiiiii’ was followed by ‘CrownUpJr’ bagging 2.22 million chips to Day 2. To know further, click here.

Another popular featured tournament on Spartan Poker, Destiny 13.0 INR 30 Lakhs GTD attracted a massive field of 824 entrants after each one paid a buy-in of INR 5,500. Now, the country’s poker enthusiasts are well aware of the prizes of this flagship event which offers the top 3 champions of Destiny’s SnG Finale a chance to visit the world’s poker capital, Las Vegas!

Over 7+ hours of intense grinding, Anant Purohit who rode past the field last night to grab his second title! Making few deep runs, the champion took down last week’s IOPC Event #45 TGIF and also finished 5th in Sunday’s Millionaire Legends! Purohit who plays under the username ‘Pro’ settled for a heads-up deal that saw Abhishek Goindi in the runner-up position. To read more, click here.

The IOPC’s Day 13 ended with Daily Hi-Fi being the last tournament of the day. For a buy-in of INR 3,300, the event garnered 547 runners hunting to grab the largest portion of INR 16.41 Lakhs prize pool. While the top 54 places finished in the money receiving INR 7,384 as min-cash, it was an anonymous player who is an online reg ‘space ace’ who powered through the field and defeated the winner of the Event #73 Destiny, Ashish Ahuja aka ‘Spewushhhiiiii’ in heads-up.

In level 49 of the tournament, ‘space ace’ (A♦ J♦) who had a bigger stack of 3.5 million was up against Ahuja (5♥ 5♣) with 1.9 million. Pre-flop saw both players putting their entire stack in the middle. Eventually, the board opened J♣ 8♣ 9♥ 3♠ A♥ and ‘space ace’ remained undefeated with his two pair of Aces and Jacks while Ahuja walked out with his single pair of Fives.