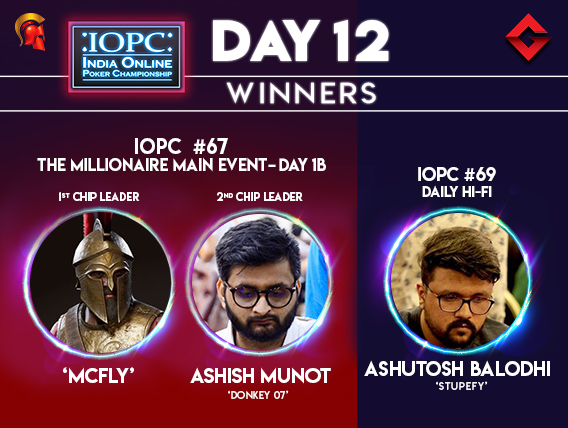 
The India Online Poker Championship (IOPC) promised INR 16+ Crore as the series guarantee on Spartan Poker which is now heading towards its final stretch. The competition is heating up as the most-awaited Millionaire Main Event INR 3 Crore GTD finished the second of its eight starting flights. And here is the complete summary of IOPC Day 12…

INR 550 is the lowest buy-in tournament in IOPC for the day. The first event saw a healthy participation of 606 entries that drove the prize pool up to INR 3.09 Lakh. The top 39 finishers shared a portion from the same, but the biggest prize went to ‘Smokijoejr’ who took down the tournament after beating ‘Boris brejcha’ in heads-up.

In Level 45 of the tournament, ‘Smokijoejr’ with A♦ 7♦ up against ‘Boris brejcha’ with T♠ Q♦. The latter put his entire stack in the middle and got a call from the former. The board opened T♥ 6♥ 5♥ A♠ 9♠ and ‘Smokijoejr’ with a pair of Aces eliminated his opponent who had a pair of Tens.

The second tournament of the day saw the buy-in jump up to INR 1,100. Attracting a total of 574 entrants which was enough to beat the guarantee, generating a final prize pool of INR 5.74 Lakhs. Again, the top 39 places walked out earning their share of min-cash INR 3,960. Outlasting the field was an anonymous player ‘pokervlogger’ who eliminated ‘Kingsb30’ in heads-up for the title.

Heads-up play in Level 40 was where it all ended. ‘pokervlogger’ with Q♥ 4♥ was ahead in chips against ‘Kingsb30’ with 2♥ A♠. A flop of 7♥ J♥ 2♦ proved beneficial for the former eagerly waiting for the remaining streets. Turn was 9♣ which saw another round of betting 360k by the latter and a flatcall from ‘pokervlogger’. With T♥ ’pokervlogger’ rivered a flush and ’Kingsb30′ failed to dominate his opponent who collected all the chips from the pot and the title too!

This was the major attraction of the day on Spartan Poker. 344 players pounced on Day 1B of the IOPC The Millionaire Main Event after paying a buy-in of INR 11,000. Possessing the largest stack at the end of the day was ‘McFly’ with 285,688 chips. Following the chip leader was a prominent name in the circuit, the 2019 WPT Main Event winner Ashish Munot aka ‘Donkey 07’ with 200,734 chips. To know further, click here.

The Mega Stack INR 25 Lakhs was another of the featured tournaments of the day with a buy-in of INR 3,300. Recording a massive field of 988 entries, which was enough to smash the tournament guarantee, a prize pool of INR 29.64 Lakhs was created out of which 95 players earned INR 8,743 min-cash for their efforts. Capturing the largest chunk of the same was ‘masterbluff’ who railed out ‘PirateMihawk’ in heads-up with his two pair of Aces and Deuces over his opponent’s single pair of Aces. To read more, click here

Following the trend, it was the Daily Hi-Fi to end proceedings again on Spartan Poker, for a buy-in of INR 2,750. A total of 655 entries broke the guarantee to accumulate INR 16.37 Lakhs in the prize pool and PokerGuru brand ambassador Ashutosh Balodhi aka ‘stupefy’ walked away as the official champion after the players decided to settle for a heads-up deal. Eventually, the IOPC Event #59 Big Daddy winner ‘CrownUpJr’ was sent to the runner-up position.

Check out the IOPC leaderboard after Day 12:

For more updates on the ongoing India Online Poker Championship (IOPC) and other tournaments around the world, stay tuned to GutshotMagazine.com.