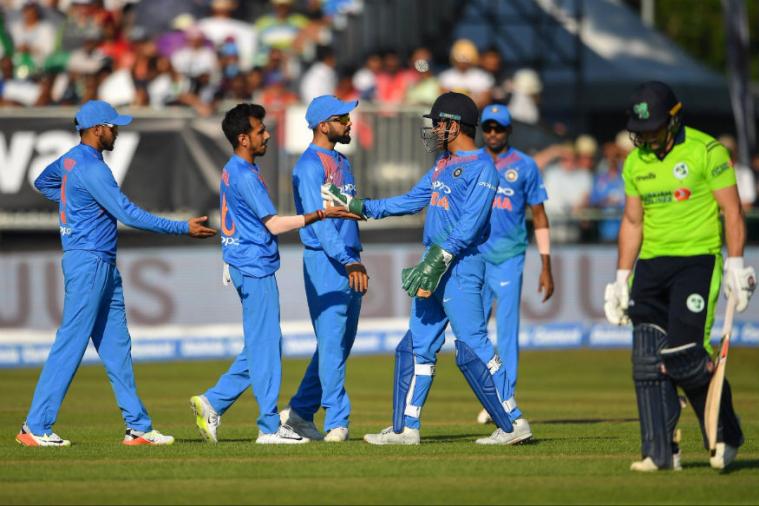 
India are preparing for an arduous upcoming tour of England, where they will be playing 3 ODIs, 3 T20Is and 5 Tests over the course of more than 2 months. To help them acclimatize, a series of 2 T20Is was scheduled between India and Ireland, which became the first bilateral series between the two countries.

It was a packed house at the Malahide Cricket Club in Ireland and India were put in to bat in the 1st T20I. What followed was absolute carnage, as the Indian openers Rohit Sharma and Shikhar Dhawan went after each and every Irish bowler. They both crossed fifties and shared an opening partnership of 160, with 13 fours and 10 sixes scored between them.

While Dhawan fell earlier for 74(45), Sharma played a brilliant knock of 97(61), falling tantalizingly short of his third T20I century, and he would become only the second person after Colin Munro to have achieved this milestone. However, it wasn’t to be as India lost a few at the backend, including 3 wickets in the last over, finishing with 208/5. Peter Chase picked up career best figures of 4/35.

The chase was always going to be tough for the home team, up against some of the best T20 bowlers in the business. Among all the Irish batsmen, only James Shannon kept things going, scoring 60(35) and the next best Irish score being only 12. The Indian spinners wreaked havoc in the middle overs.

There was doubt whether Yuzvendra Chahal would be played in this game, but he played and bowling in tandem with Kuldeep Yadav, they picked up 7/59 in their 8 overs together. Ireland were restricted to 132/9 and India picked up a 76-run victory with Yadav picking up a career best 4/21. Man of the Match – Kuldeep Yadav.

Keep reading GutshotMagazine.com for similar big sporting updates from around the world.