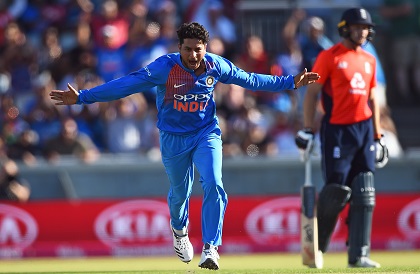 
The Indian cricket team began their tour of England yesterday – a tour that has been a matter of discussion since a few months now. With India’s history of being unable to dominate in England, they’ve put in a lot of preparations and part of that showed in yesterday’s 1st T20 against the hosts.

They whitewashed Ireland in the 2-match T20I series and yesterday, registered an emphatic win against England as well. They won the toss and elected to field first in the first of the 3-match series, as the Indian team loves chasing. They played without their T20 specialist bowler Jasprit Bumrah, who was ruled out of the series with an injury.

England got off to a flier, with Jason Roy and Jos Buttler continuing their good form and punishing the Indian pacers in the powerplay overs. These two looked like they were taking the game away from India but after a 50-run opening stand, only one of the next 8 English batsmen got to a double-digit score.

Kuldeep Yadav came in to bowl and he changed the course of the game, picking up 3 important wickets in one over and then finishing with career-best figures of 5/24, beating his previous best of 4/21 against Ireland last week itself. He now has 12 wickets in his last three T20I games and also recorded the best figures by a Chinaman bowler in T20 internationals.

The English batsmen had no answer to Yadav’s bowling and they thought bringing on their spinners would do the trick when India was batting too. However, it had the opposite effect, as a set Lokesh Rahul took on Moeen and Adil Rashid, depositing them into every stand possible at the Old Trafford.

He smashed 101(54)* and became only the second Indian to register 2 T20I centuries, after Rohit Sharma. The rest of the Indian batsmen hit 56 in 56 balls and they played around Rahul, who continued his sensational form that he displayed in the recent Indian Premier League. India took a vital 1-0 lead in the series. Man of the Match: Kuldeep Yadav.