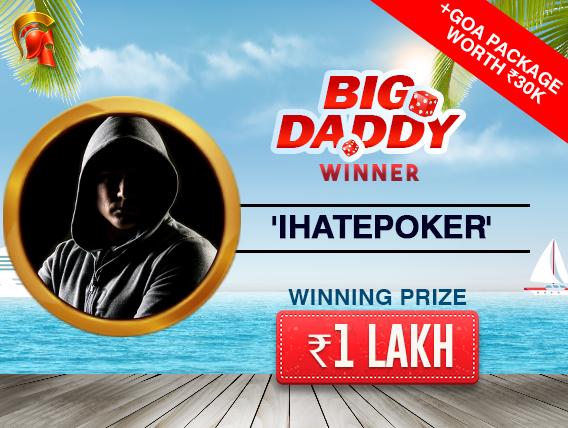 
Big Daddy INR 5 lakh GTD is one of The Spartan Poker’s most popular weekly tournament offerings because of the fact that the players are not just playing for the prize money, but also the added motivation of winning an INR 30,000 package trip to play poker in Goa.

Every Sunday, many top players from around the country gather to play the Big Daddy tournament on Spartan at 4pm, aiming for a Goa trip with a buy-in of just INR 1,100. Yesterday was one such edition of the tournament, where a total of 396 players paid the entry fee to be a part of the competition.

From these, only the top 36 were paid out, with a minimum cash prize of INR 3,250. It was a grind that lasted a little over 5 hours on Spartan, eventually ending at 9:07pm last night, right in time for the bigger tournaments to be played. Here, however, it was ‘ihatepoker’ who emerged victorious, shipping the tournament for the top prize of INR 1 lakh to go with a trip to Goa.

The player has been having a good run on Spartan of late and this victory proves exactly that. He/she will now be packing their bags to fly to Goa courtesy The Spartan Poker, where the player’s flight tickets, hotel stay and entry into the Big Daddy poker room will be handled.

Among the many regulars who cashed out in the tournament were Rajesh Tallapaneni aka ‘THALAIVA AR’ (14th), who also won the Lightning Leaderboard for the month of November; Anirban Das aka ‘pokernoob’ (12th), Ashish Ahuja aka ‘Spewushhhiiiii’ (10th) and Bhanu Prakash ka ‘spectre’ (8th). Ahuja also shipped the 2oK tournament later in the night for a whopping pay-out of INR 15 lakh.

For more updates on the biggest poker tournament offerings from India and around the world, keep reading GutshotMagazine.com.